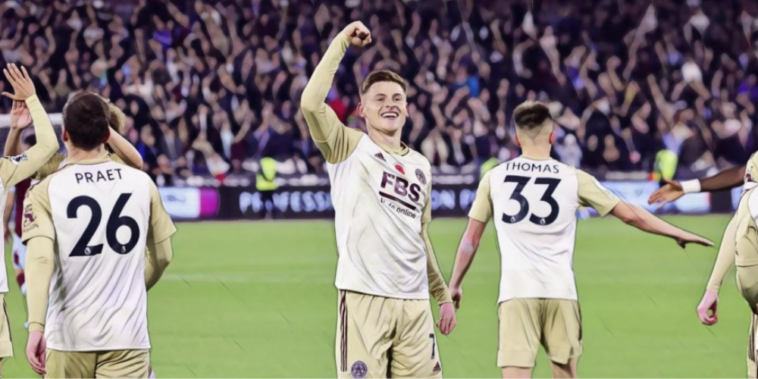 If there’s a way to bounce back from the disappointment of missing a major tournament, this is it.

Ivan Toney was left out of Gareth Southgate’s plans for Qatar, but provided an immediate reminder that he is irreplaceable to his club side. Toney has tormented defences since stepping up to the Premier League and produced a brilliant centre-forward display against Manchester City.

Pep Guardiola’s side could not deal with the 26-year-old and a direct approach from Brentford, who utilised David Raya’s excellent distribution and their aerial threat to go from back to front with pace and accuracy.

Saturday: Ivan Toney scores his 20th goal of the year… against Man City.

Toney was the major beneficiary of the approach, as he scored the opener from Ben Mee’s knockdown to set an upset in motion. He added a second in stoppage-time to stun City, as Brentford burst forward on the break to snatch all three points in dramatic fashion.

His outstanding performance came too late to earn an England inclusion, but was a demonstration of the qualities that have made Toney a leading forward at this level. It’s now ten for the season for Toney, who could be subject of significant interest in the coming transfer windows.

Cristiano Ronaldo’s unhappy return to Manchester United has reached a new low, with a controversial interview set to make his time at the club untenable.

Ronaldo wanted to leave during the summer but found suitors in short supply, leaving him in limbo as the odd man out in a squad largely behind new manager Erik ten Hag.

Ronaldo’s interview – which will be released in full later this week – saw him take aim at the club and Ten Hag, admitting he has no respect for the Dutchman and how he feels betrayed by those at Old Trafford.

His comments come less than a month after Ronaldo refused to come on as a substitute against Spurs, actions which saw him briefly suspended and omitted from the squad that faced Chelsea. His personal unrest has been a negative energy at a time when the Red Devils have shown positive signs and is set to lead to a sad end to his time with the club. It has been difficult viewing as Ronaldo’s ego and unhappiness has tarnished his iconic status.

No defender in Premier League history has provided more assists than Andy Robertson, who tied Leighton Baines’ landmark of 53 this weekend.

Robertson was back to his best as Liverpool beat Southampton at Anfield, marauding forward with intent down the Liverpool left. The quality of his service was exceptional, first from a set piece as he curled in a fantastic free-kick for Roberto Firmino to flick home.

The 28-year-old then teed up Darwin Nunez, racing forward before squaring for the Uruguayan to tap home from close range. His second assist moved Robertson level with Baines, though he has reached 53 assists in 190 games fewer than the ex-Everton favourite.

It has been service of the highest standard for several seasons from the Scotland captain.

Everton are in trouble after a 3-0 defeat at Bournemouth, one which leaves the Toffees just outside the Premier League’s relegation places.

Jordan Pickford contributed to their collapse on the South Coast this weekend, with the England number one making a dreadful mistake for the opener. He spilled Dominic Solanke’s tame effort, allowing Marcus Tavernier to poke Bournemouth into the lead.

It was an untimely error from Pickford which set the tone for the Toffees’ latest loss. The pressure is on for Frank Lampard and his struggling side.

Everton fans are NOT happy 😳 pic.twitter.com/3nYqP35WMd

Bournemouth head into the World Cup break on a high, having secured a second successive win against Everton. Fresh from thrashing the Toffees in the Carabao Cup, the Cherries repeated the feat with a 3-0 win in the Premier League.

Marcus Tavernier has hit a real purple patch of form, with the summer signing having been excellent in recent weeks. Taverneir struggled for end product during his opening weeks as a Bournemouth player, but has now began to produce on a consistent basis.

Marcus Tavernier is the first ever @afcbournemouth player to both score and assist in back-to-back #PL matches ✌️#BOUEVE pic.twitter.com/3PjFWYC4LD

The 23-year-old became the first Bournemouth player to score and assist in consecutive Premier League games, after creating one and scoring another against Everton.

He now has two goals and four assists in his last three appearance for the Cherries, form which has helped to carry Bournemouth up to 14th – three points clear of the bottom three.

Crystal Palace head into the break on the back of a disappointing defeat, after a 1-0 loss at Nottingham Forest ended the Eagles’ improved run of form.

Wilfried Zaha missed Palace’s best chance after putting a first-half penalty past the post. The Ivorian had sent Dean Henderson the wrong way, but missed the target completely with a poor effort.

Zaha has now missed four of his last seven penalties for Palace (57%), including two already this season. It might be time for a change of taker at Selhurst Park, with the club’s talisman having been less than reliable from the spot of late.

Harvey Barnes has been a key contributor to Leicester’s recent revival and the winger continued his goalscoring form with the clincher at West Ham this weekend.

Barnes was a threat all afternoon with his pace and penetrative running behind opposition defenders and was rewarded with a goal as he burst beyond Nayef Aguerd and fired under the onrushing Lukasz Fabianski.

It was a fifth goal in eight league games for Barnes, who can perhaps count himself unfortunate to have been overlooked for England’s World Cup squad. He’s been directly involved in 18 goals in 2022 with only four English players – Harry Kane, James Maddison, Ivan Toney and Bukayo Saka – having contributed to more.

Brighton scored their fastest ever Premier League goal after just 49 seconds this weekend, but were unable to hold on as Aston Villa came from behind to win at the Amex Stadium.

Lewis Dunk gave the visitors a helping hand after conceding a penalty, with the centre-back’s rash challenge on John McGinn punished. Dunk dived in in the penalty box to bring down the Scotland midfielder, who got to the loose ball first.

Remarkably, it was the third penalty Dunk has conceded in just four Premier League games. He had not conceded a single spot kick in his previous 182 appearances.

3 – Lewis Dunk has conceded a penalty in three of his last four appearances in the Premier League, having not given away a penalty in any of his first 182 games in the competition beforehand. Rut. pic.twitter.com/uGsT1q0FPk