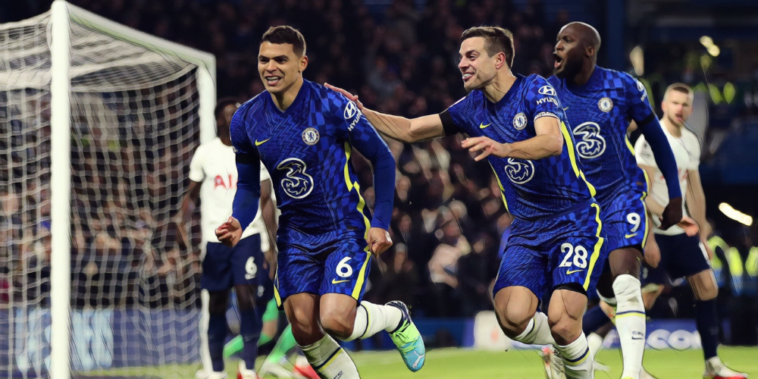 Manchester United climbed into the Premier League’s top four with a late win over West Ham, whilst Norwich moved out of the division’s bottom three for the first time this season after securing back-to-back wins.

Josh Sargent has endured a testing time since arriving at Norwich last summer, the £8m signing from Werder Bremen having failed to score in his opening 18 appearances of the campaign.

That run included a woeful open goal miss against Brighton in October, but the forward’s persistence has paid off after his double downed Watford this weekend.

Sargent scored twice as Norwich moved out of the relegation places for the first time this season, his first a brilliant instinctive effort as he scorpion-flicked Teemu Pukki’s cross in off the underside of the crossbar.

"This is absolutely OUT OF THIS WORLD!" 🤯

The 21-year-old then showed great desire and bravery to head home a second and double the Canaries lead, in what Dean Smith will hope is the start of an upturn in fortunes for the US international.

Sargent’s strikes can serve as a huge confidence boost for both an emerging player and Norwich’s bid for Premier League survival.

Tottenham were beaten by Chelsea for the third time in January this weekend, with the North London side’s top-four hopes suffering a blow at Stamford Bridge.

Thomas Tuchel changed his formation to a 4-3-3 system for the clash and the use of Callum Hudson-Odoi and Hakim Ziyech as traditional wingers caused problems for the visitors.

Hudson-Odoi in particular shone during his duel down the left-hand side, isolating Japhet Tanganga and giving the defender a torrid time.

Tanganga was booked for hauling down Hudson-Odoi and his caution only made matters more difficult as Chelsea sought to expose a mismatch between the duo down the flanks. It was a chastening evening for Tanganga and little surprise when he was withdrawn from proceedings.

Thiago Silva continues to defy time as the centre-back produced another evergreen performance in a Chelsea shirt, marshalling the west London side’s backline superbly in the win over Tottenham.

Silva was forced to walk a tightrope after an early caution for a cynical foul and perhaps got away with one following Harry Kane’s disallowed goal, having gone down easily after being eased off the ball by the Tottenham forward.

He was, however, class and composure personified again and threatened throughout from set-pieces, scoring his side’s second with a glancing header to put the result beyond doubt.

All 5 PL goals he has scored have been headers pic.twitter.com/bsEPF3WjZ4

Silva’s calm is the perfect compliment to the front-footed defending of Antonio Rudiger and together the two led to Chelsea to a clean sheet.

Watford’s decision to sack Xisco in October seemed harsh, severing ties with the promotion-winning manager despite a return of seven points from the club’s opening seven fixtures.

The Hornets have since taken seven points from their last 14 games, with successor Claudio Ranieri under huge pressure following Friday’s 3-0 defeat to fellow strugglers Norwich.

“I can assure you that the whole team and everyone at the club will do their best to get out of this situation.”

The faulty floodlights were not all that was wrong on a humbling evening for the home side, who looked short of ideas and now find themselves in the Premier League’s relegation places.

Watford’s hierarchy have been notorious for a lack of patience in recent seasons and it would be little surprise to see the trigger-happy regime make more changes before the end of the campaign.

Pep Guardiola lauded Ralph Hasenhuttl as one of the best managers in the division ahead of Manchester City’s trip to face Southampton, with the praise justified as the champions were held to a draw.

"It was a fantastic deep-defending performance." 👏

Ralph Hasenhuttl has heaped praise on Fraser Forster and his back-four after their draw with Manchester City…😇 pic.twitter.com/T1FgWmuiC2

Consistency has not always been prominent in Southampton’s performances under Hasenhuttl, but the Austrian’s demands for high-intensity football and faith in young talent deserve huge credit.

Mohammed Salisu’s stand-out performance was a reward for Hasenhuttl’s patience with the young defender, whilst he has already shown this season – with his trust in Armando Broja and Tino Livramento – that he’s prepared to gamble on prospects who’ve failed to earn a chance at bigger clubs. Another, Walker-Peters, has enjoyed an excellent season and took his goal this weekend in fine fashion.

Arsenal’s hopes of a top-four finish could hinge on their ability to sign a centre-forward this week, with the Gunners’ goalless draw with Burnley a blow to their chances of Champions League football.

Alexandre Lacazette has won praise for his performances in recent months, offering an experienced foil for the North London side’s emerging attacking talents.

The Frenchman works hard and links the play impressively, but has struggled to find the net and his lack of a killer instinct could prove costly for Mikel Arteta’s side.

Lacazette failed to convince in front of goal once again against the Clarets, spurning a clear sight of goal following Emile Smith Rowe’s positive run and cut-back.

The 30-year-old will have a part to play in Arsenal’s run-in, but with just three league goals this season there is need for reinforcements before next week’s transfer deadline.

Wolves are quietly climbing towards the European positions, earning a third consecutive league win after beating Brentford 2-1 this weekend.

Bruno Lage has recovered from a shaky start to turn Wolves into one of the Premier League’s most awkward opponents and his side have now lost just twice – against Liverpool and Manchester City – in their past 10 games.

The win at Brentford was inspired by the club’s Portuguese midfield duo of Ruben Neves and Joao Moutinho, each impressing and finding themselves on the scoresheet against the Bees.

Wolves are now eighth, just four points behind Manchester United in fourth and with a game in hand on the Red Devils, whilst the club also boast the second-best defensive record in the league behind Manchester City. European qualification is a real possibility on current form for Lage and his side.

For the second successive fixture, Leicester let a lead slip late on to throw away precious Premier League points.

Steven Bergwijn’s stoppage-time double saw Tottenham snatch victory from the jaws of defeat at the King Power Stadium in midweek, whilst Danny Welbeck’s late leveller for Brighton saw the Seagulls share the spoils at the same venue this weekend.

Leicester are short of several options and their defence in particular has felt those absences, struggling for solidity and regularly failing to see out results.

Having started the season with aspirations of gatecrashing the top four, the Foxes find themselves in mid-table mediocrity and long way from the sides they had hoped to challenge this season.

Read Also – Golazoooo: Celebrating every goal to win the prestigious