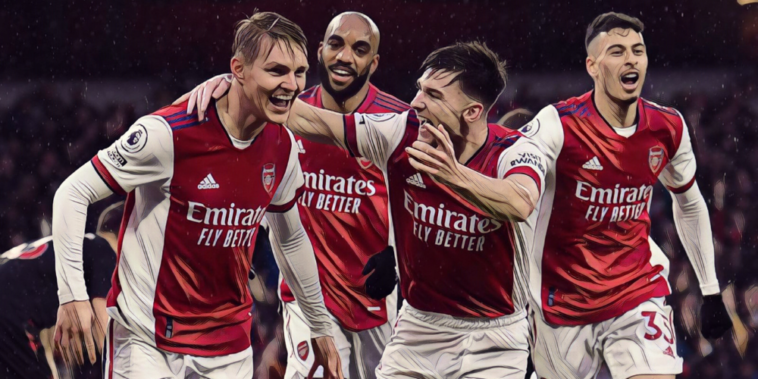 There was drama and controversy across the division following a whole host of crucial penalty decisions, with the Premier League’s top three all benefitting from spot-kick decisions to earn three points.

Elsewhere, Arsenal and Leicester secured comprehensive victories to boost their European aspirations, whilst Brentford left it late to beat Watford in the battle of the promoted sides.

Chelsea face a major transfer decision on the future of Conor Gallagher, with the midfielder continuing to enhance his burgeoning reputation during a season-long loan spell at Crystal Palace.

Gallagher is the latest academy graduate to inflate his price-tag with performances elsewhere, flourishing in the colours of the Eagles during a brilliant start to the season.

The 21-year-old took his total to six league goals for the campaign after scoring twice in the 3-1 win over Everton this weekend, his second a stunner from distance to seal all three points for Patrick Vieira’s side.

Gallagher has proven the perfect fit for Palace following his summer arrival from across the capital, his infectious energy and drive having helped transform an Eagles team in need of youthful dynamism.

Just one u23 player – Mason Mount – has provided more than Gallagher’s 10 goal involvements in the Premier League this season, whilst only Mount has outscored the midfielder amongst Chelsea’s current options.

Regardless of whether he eventually earns a place in Thomas Tuchel’s plans or departs for pastures new, his loan move to Palace has been a hugely beneficial deal for all three parties.

Pierre-Emerick Aubameyang may not have featured for Arsenal this weekend, but the club captain earns inclusion amongst our villains after being dropped from the squad for a disciplinary breach.

It is the latest sorry state of affairs for a forward who has failed to lead a young side by example this season, with Aubameyang possessing previous for disciplinary issues and his status as captain has once again been called into question.

The Gabon international’s form has hardly been of the required standard and his off-field misdemeanour has threatened his place amongst Mikel Arteta’s plans, with replacement Alexandre Lacazette taking his chance and scoring in the 3-0 win over Southampton.

🗣 "Unfortunately due to a disciplinary breach."

Mikel Arteta explains why Pierre-Emerick Aubameyang is not in the Arsenal squad today pic.twitter.com/Je1cIvm5oA

The latter provides effort if not a prolific source of goals, though Aubameyang has hardly contributed the latter during a series of underwhelming showings this season.

Arsenal are arguably a better side without the 32-year-old in it, but their chances of shifting an ageing player have been hindered by the lucrative contract handed to the forward in a past deal wrapped in a sense of desperation. The Gunners have been down this road before.

Leicester’s summer signing of Patson Daka from Red Bull Salzburg was viewed as the club’s long-term replacement for Jamie Vardy, a forward similar in style with pace to trouble defenders and instinctive finishing when opportunities arrive.

Daka scored 27 goals in 28 league appearances for the Austrian champions last season, but has had to be patient for his chance this term with Vardy still finding himself amongst the goals.

The Zambian has started each of the past two league fixtures, however, and shone during the 4-0 win over Newcastle with a goal and assist at the King Power Stadium.

Directly involved in a goal once every 57.6 minutes. 🔥 pic.twitter.com/ntZUusHuur

Daka worked hard and ran the channels admirably for the Foxes, whilst his movement and link-up play was central to Leicester running riot across the second half.

Daka has now scored seven goals and provided three assists in eight starts across all competitions, whilst he is averaging a goal or assist every 57.6 minutes in the Premier League this season.

It’s a fine rate of productivity for a young player still finding his feet in English football and one that will have the Foxes’ fans excited about the future.

It’s difficult to think of a more avoidable red card than the one Raul Jimenez received this weekend, the Mexico international’s brainless decision to block Rodri’s free-kick leaving Wolves with a mountain to climb.

Bruno Lages’ side had defended well across the opening 45 minutes against Manchester City, their negative tactics ensuring the desired result as the half-time whistle approached with the game goalless.

Raul Jimenez got sent off for two yellow cards in 48 seconds 😳 pic.twitter.com/IPCQ49EIPg

Jimenez, however, undid much of their work during 48 seconds of stupidity, refusing to move away after receiving a caution for bringing down Rodri, his decision to block the quickly-taken free-kick from just a yard away earning an instant second booking.

In the absence of Jimenez and the subsequently substituted Adama Traore the visitors lacked an outlet, the continued pressure from Manchester City eventually rewarded as the 10 men of Wolves suffered a narrow defeat at the Etihad.

Martin Odegaard produced arguably his best performance in an Arsenal shirt this weekend, continuing his fine form with a third goal in three Premier League appearances.

The Norway international has thrived since being pushed into a more advanced position, a role which allows the 22-year-old to receive possession in dangerous areas higher up the pitch.

Whilst there remains improvements to be made, there have been encouraging signs in recent weeks with Odegaard having registered three goals, 12 chances created and 28 ball recoveries across his past four appearances – including a first-ever headed goal against Southampton.

Odegaard has the talent to unlock defences with his passing range and with the runs of Gabriel Martinelli and Bukayo Saka providing penetration out wide, he can continue to develop as the creative centre-piece of Mikel Arteta’s side. Out of favour and out of the side earlier in the season, he has grown in stature in recent weeks.

Watford remain the only side in the Premier League without a clean sheet this season and it’s difficult not to point fingers at their blundering backline.

William Troost-Ekong has been amongst their most error-prone players since returning to the Premier League this season and the Nigerian defender produced another costly calamity in the defeat to Brentford.

Watford had taken the lead against the Bees but departed without a point, Troost-Ekong’s clumsy challenge in stoppage-time handing Brentford a late chance to win it from the spot.

It followed previous mistakes against Leicester and Brighton earlier in the season and – if funds are provided – the signing of defensive reinforcements should be high on the agenda for Claudio Ranieri next month.

Liverpool ruined Steven Gerrard’s return to Anfield with a 1-0 win over Aston Villa and it was the Reds’ current hero who did the damage against a former favourite.

Salah has had more prominent games than an underwhelming 90 minutes against Villa, but it was the Egyptian who once again delivered to ensure Liverpool keep pace in the title race.

Mo Salah has now been involved in 30 goals across all competitions this season.

No other Premier League player has been involved in 15.

In a world of his own 🤯 pic.twitter.com/OTuuYIArpi

The 29-year-old won and converted the crucial penalty on Merseyside, registering a Premier League goal involvement for the 14th consecutive fixture with Jamie Vardy’s divisional record of 15 now within sight.

Salah’s spot-kick was emphatically slammed past the boisterous Emiliano Martinez for his 15th successful penalty in a row – the second longest run in the Premier League without missing after Matt Le Tissier (23).

Manchester United laboured to a win over Norwich at Carrow Road, the Red Devils requiring a Cristiano Ronaldo penalty and some fine saves from David de Gea to seal a narrow 1-0 success.

Ralf Rangnick has implemented his preferred 4-2-2-2 system during his first fixtures in charge, but it will take a period of adaptation before the managers methods begin to bear fruit.

The formation has failed to find the best from Bruno Fernandes, who operating as an advanced midfielder has been wider than he became accustomed under Ole Gunnar Solskjaer.

The Portugal international produced a poor performance at Norwich, ineffective and wasteful in possession as the Red Devils failed to click in the final third.

Fernandes, Ronaldo and Rashford lost possession on a staggering 65 occasions between them at Carrow Road with Fernandes the most guilty culprit, the midfielder struggling to find his best form and role since conceding talismanic status to Ronaldo last summer.