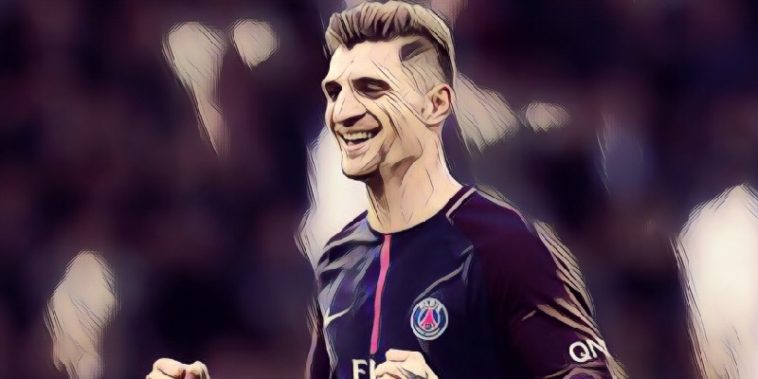 In this modern world of social media, fans often look for the smallest of clues that a transfer could be about to happen.

Whether it be a player liking a post, following a certain club or player, or making a simple comment, fans are easily excited by the littlest of things.

Well, Manchester United fans were the ones getting all excited in recent days after Paris Saint-Germain defender Thomas Meunier took to social media. United have been linked with a move to Old Trafford in recent months, with the right back rumoured to be a potential successor to Antonio Valencia.

The right-back has previously described himself as a United fan, and even told Belgian news outlet DH: “On the other side of the channel, there are the stadiums, the fans, and I’ve never hidden that I’m a big fan of Manchester United, which remains, in my eyes, the real reference in the world of football.”

Well the Belgian clearly had an eye on the Red Devils recent game against Chelsea on Sunday, taking to twitter to celebrate Romelu Lukaku’s equalising goal, with many fans taking it as a hint that a move to Old Trafford could be on the cards. He tweeted:

Of course, this could be a hint of a transfer, or just a simple celebration of a goal scored by a team that he has already admitted that he admires.

The other thing to take into consideration is that Lukaku and Meunier are good friends and teammates at International level with Belgium.

Is Meunier just happy for his friend and teammate, or is there more to it? Leave your thoughts below.