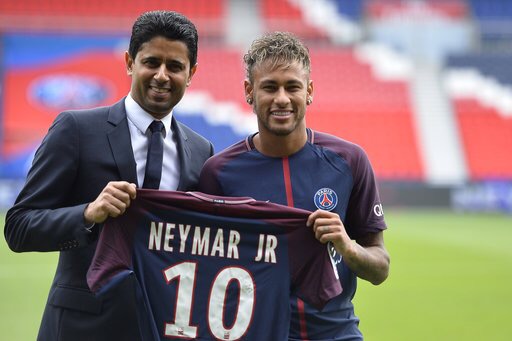 Neymar has forced a transfer to PSG for a world-record transfer fee of £200 million. He left the infamous MSN to join the Parisian club. But will this transfer hinder Neymar’s future achievements and was it the right time to leave?

Can Neymar win the Ballon d’Or at PSG?

Neymar is one of world footballs biggest super-stars. At 25 years-old he is still a relatively young player and has a long career ahead of him. At this time, Neymar is the youngest player in the top 10 of the Ballon d’Or rankings. This suggests that Neymar should be aiming to top the rankings as the older players start to retire or drop in performance.

In the rankings, only Griezmann (ranked third) and Pogba (joint 14th) are a similar age to Neymar. So one of these three players should be winning the Ballon d’Or when Ronaldo and Messi step back from the limelight. But will PSG and Brazil’s squad allow Neymar to win enough silverware to secure a Ballon d’Or?

PSG have never won a Europa League or Champions League in the competitions histories. If this does not change Neymar will not win a Ballon d’Or.

Neymar will be the player PSG expect to change the barren run in European competitions, but he can’t do it alone. If PSG spend in coming years they could build a strong enough squad but this will take years, especially if they get a sanction due to Neymar’s transfer under financial fair play.

The other major problem silverware wise for Neymar is Brazil. They always underperform when pressure is applied, for example losing to Germany 5-1 in the semi-finals of the last World Cup. Both Pogba and Griezmann play for France. The French have a very talented team with insane squad depth.

Pair this with the biggest rising star in world football, Mbappe, France could become an international power-house. Brazil have an ageing squad with a lack of depth.

If France win an international competition, Neymar may miss out on the Balon d’Or because of it. In my opinion, Neymar is on the same level as Griezmann but he will be punished for his nation’s lack of quality in certain positions. Brazil do have a lot of skilful players but they lack the squad depth to compete with the likes of Germany and France.

Both of these could majorly reduce the number of Ballon d’Or’s Neymar wins.

Was this the right time to leave Barcelona?

I think it was. It makes sense to leave now when a club has the money to pay the release clause in his contract. If another player moved for a world record fee this year, for example Mbappe, Neymar might of seen his buyout clause increased to price him out of a move. Neymar wanted the move for a “new challenge” so it seems this move gives him what he wants. It also provides Barcelona the financial firepower to sign a player to replace Neymar and to strengthen the squad to try and beat Real Madrid to the La Liga and Champions League title. So this move could benefit both the club and the player.

Did MSN fall short in silverware?

MSN have not delivered the silverware for the amount of goals they have scored. MSN have played together for three-years. In this time, they have made 450 appearances scoring 364 and getting 211 assists. These stats are very impressive, but this partnership failed to win competitions with this dominance. You would expect these stats to win multiple competitions every year and earn one player the Ballon d’Or every year in this three-year period. But this is not the case. They only won the Champions League once in the three years and won one Ballon d’Or. The success they had was more domestic winning two La Liga titles. Don’t get me wrong, this is still an impressive collection of trophies in three years, but Ronaldo has closed the gap to one Ballon d’Or on Messi’s five, showing they have not won the most important trophies.

Barcelona have not been more dominant due to the ageing squad. The club stalwarts have left or are underperforming, like Iniesta. To catch up with the dominant Madrid of last season they need to spend. Selling one of these players is a good way to fund this spending. Neymar contributed the least to this trio so for Barcelona it makes sense to sell one player to fund a rebuild for more team success. The other thing the signings need to do is preform. Suarez is the last good signing Barcelona made back in the 2014 / 15 season. Business in the transfer windows since has been poor. This needs to change to look like Guardiola’s dominant Barcelona.

In conclusion, it was the right time for Neymar to go. Both the club and the player have benefited from the deal financially and also in facing new challenges. I don’t know if PSG will ever strengthen enough to win a Champions League so Neymar may not win a Ballon d’Or. This would be a shame as such a talented player deserves to officially be the best for a year at least.