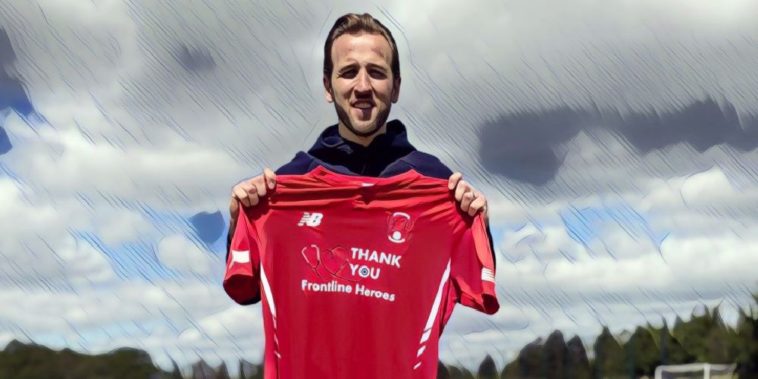 Harry Kane will sponsor the shirts of League Two Leyton Orient next season after stepping in to help the struggling side amid the coronavirus pandemic.

The England captain made his senior first-team debut for Orient during a successful loan spell with the club nine years ago, and has now announced a sponsorship deal that will benefit both his former side and a series of charitable causes.

Each of Orient’s three kits will display a different sponsorship, with the home shirt featuring a thank you message to the frontline staff currently working tirelessly for the NHS amid the coronavirus pandemic.

The away shirt is dedicated to Haven House Children’s Hospice and the third kit will support Mind, a charity that focuses on tackling mental health issues.

🤯 We've been absolutely blown away by the response.

To put it into context, we've already sold 1/3 of what we did for the *whole* of this season!

If you want to make sure you get one – head to our store and pre-order now!#LOFC

No figures have been released detailing the value of deal, but the Telegraph estimate that between £50,000 to £100,000 is the norm at League 2 level, whilst Orient have revealed that 10 percent of the proceeds raised from shirt sales will be donated directly to the charities involved.

Speaking on the deal, the Spurs striker admitted it was a ‘no brainer’ when presented with the opportunity to help ‘three amazing causes’ alongside a Leyton Orient side he revealed he retains a ‘soft sport’ for.

“My brother came to me and told me what they’d like and for more thoughts on it and I fell in love with the idea straight away to be honest,” Kane told Sky Sports News.

“I thought it was a no brainer. It was a chance to help obviously three amazing causes and a chance to help Leyton Orient as well, who gave me my first start, was a huge part in my success story.

“We got the OK from Tottenham, the Premier League, the EFL and everyone was on board and that kind of got the ball rolling and thankfully we’ve finally launched.

“I loved every minute there. I loved the lads, loved playing in professional football and just kind of always had a soft spot.

“Obviously being so local to Leyton Orient, I was born within a couple of miles, and although I supported Tottenham growing up I think everyone has that local team they look out for down the leagues, and Leyton Orient was mine.”