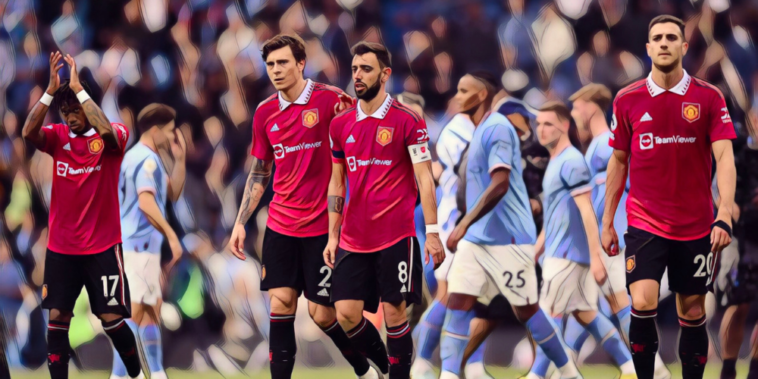 Manchester United suffered a setback after a humbling derby defeat at Manchester City last weekend, with Erik ten Hag’s side on the receiving end of a humiliating loss.

Ten Hag described the game as a reality check for his team following a four-game winning run, as United were blown apart in the first half of an embarrassing encounter at the Etihad.

United were four goals down at the half-time whistle, with the Red Devils having now conceded 4+ first-half goals on four occasions since the start of the 2020/21 campaign. That is twice as many as any other side and the club’s capacity to implode is a worrying statistic.

Following their latest collapse, we remember the four times Manchester United conceded 4+ first-half goals since the start of the 2020/21 season.

Jose Mourinho came back to haunt his former side as Spurs thrashed Manchester United in October 2020. United had no answer for a ruthless performance from the north Londoners, as the Red Devils suffered their joint-heaviest defeat in the Premier League.

It was just the fourth time that United had lost by five goals in the competition and the first since Manchester City won at Old Trafford by the same scoreline in 2011.

On our last visit to Old Trafford… 🤯

Spurs became the first visiting side to score four first-half goals at Manchester United since they did so in 1957, in what was a frantic start to the clash. United took the lead inside two minutes as Bruno Fernandes scored from the spot, but Spurs were ahead just five minutes later after quick-fire goals from Tanguy Ndombele and Son Heung-min.

Anthony Martial was sent off mid-way through the first half after a putting a petulant hand into Erik Lamela’s face and Spurs steamrolled their 10-man hosts in a one-sided contest.

Son and Harry Kane each scored braces with Serge Aurier also on the scoresheet, as Spurs hit the hosts fo six – four of which came before half-time.

Little more than a year later and Manchester United were on the receiving end of another thumping, as arch-rivals Liverpool ran riot in a mismatch at Old Trafford.

Liverpool piled the pressure on Ole Gunnar Solskjaer with a brilliant attacking performance at Old Trafford, as the under-fire United manager looked on dejected as his team were exposed time and time again.

Naby Keita opened the scoring for the Merseysiders after just five minutes, before Diogo Jota arrived unmarked at the back post to turn home a second from Trent Alexander-Arnold’s cross soon after.

It was a five-star performance last time out at Old Trafford… including a record-breaking @MoSalah hat-trick ⚽⚽⚽ #MUNLIV pic.twitter.com/YoPQESgHmB

Mohamed Salah then took centre stage for Liverpool, as the Egyptian made it 4-0 to the visitors before half-time. He converted an emphatic third to score for a 10th consecutive appearance for the Reds, before placing a low finish inside David de Gea’s near post.

Salah completed the rout in the second half with his hat-trick as he became the first opposition player to score a Premier League treble at Old Trafford. It was the first time since 1955 that United had lost by a five-goal margin at home without scoring, in a fixture which Solskjaer described as the ‘darkest day’ of his career.

Brentford produced one of the most stunning results in Premier League history with an outstanding first-half performance to thrash Manchester United in August.

Erik ten Hag’s reign as manager had began with a well-deserved defeat at home to Brighton, but his early tenure reached rock-bottom after a devastating dismantling in west London.

United felt the full sting of Thomas Frank’s Bees, who bullied, battered and outplayed their opponents to race into a four-goal lead inside 35 minutes. David de Gea’s error allowed Josh Dasilva’s tame effort to squeeze in for the opener, before Mathias Jensen doubled the lead after dispossessing former teammate Christian Eriksen in a dangerous area.

Ben Mee towered over summer signing Lisandro Martinez to make it three and Bryan Mbuemo put Brentford in dreamland after latching onto Ivan Toney’s pass to make it four.

Defeat extended United’s woeful run in away fixtures to seven consecutive defeats, the club’s worst run since 1936. It was also the seventh time that the Red Devils had conceded 4+ goals in a Premier League game since the start of the 2020/21 campaign.

The optimism Manchester United had gained from four consecutive wins evaporated at the Etihad last weekend, as Erik ten Hags’s side were given a resounding reality check against their cross-town neighbours.

City were electric in the opening exchanges to put their fierce rivals to the sword, in a punishing performance that saw the Premier League champions lead 4-0 at the break.

Dominant from the first whistle, it took just eight minutes to open the scoring as Phil Foden scored his first Manchester derby goal. Erling Haaland added a quick-fire brace to put City in a commanding lead, before Foden’s second made it four before the interval.

Antony pulled a goal back for the visitors early in the second half, but Haaland and Foden each completed hat-tricks – becoming just the third teammates to net hat-tricks in a single Premier League fixture – as City scored six.

Late changes upset the rhythm of the game and allowed United to score two late goals, but it was little consolation in the highest-scoring Manchester derby of all time. Erik ten Hag criticised his team at full-time and believes United suffered from a lack of belief.

“We had a lack of belief. I’m surprised why we didn’t bring it on the pitch,” he told Sky Sports.

“It was four weeks ago, but I had seen a different team with a different spirit and a different vibe. Today, we weren’t convincing. From the first minute, we were not on the front foot and we were not brave in possession.

“It’s always difficult to find out why that is, especially straight after the game. I will have to talk to my players and find out.

“They know they can do better. You saw the performances against Arsenal and Liverpool but if you don’t fight – which we didn’t – then you have a problem against a team like Manchester City. Once again, it was a lack of belief.”