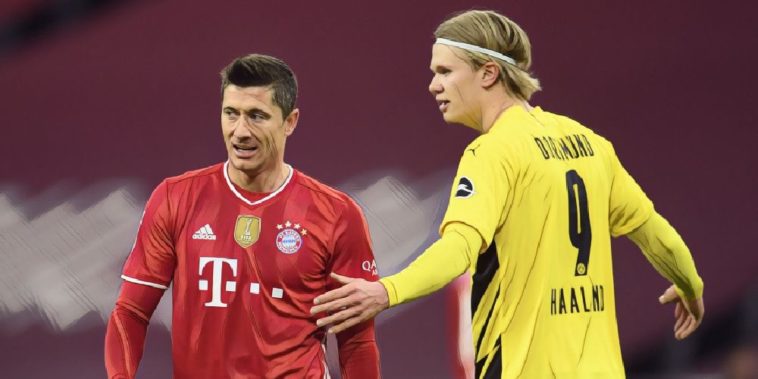 Hansi Flick has admitted that Bayern Munich will be in the race to sign Borussia Dortmund sensation Erling Haaland, following the Norwegian’s excellent Der Klassiker display on Saturday.

Flick’s men continued their pursuit of a ninth straight Bundesliga title after coming from behind to beat rivals Dortmund at the Allianz Arena, Robert Lewandowski netting a hat-trick to fire his side to a 4-2 victory.

While Bayern almost inevitably hit back to win, the visitors made a blistering start to the match, Haaland netting a nine-minute brace to once again illustrate his burgeoning reputation as one of the best in Europe.

The former Red Bull Salzburg man has now hit a mightily impressive 29 goals in 28 games in all competitions this term and has been unsurprisingly linked with a move to handful of Europe’s top clubs this summer.

The likes of Chelsea, Liverpool and both Manchester clubs have all been linked with an interest in the Norwegian, though according to Bayern boss Hansi Flick has admitted that a move to Bavaria could be on the cards.

“Very, very much is possible in life, nothing can be ruled out,” he told Sky Germany.

“But that is a long way off. He has a long-term contract in Dortmund and is an option for many top clubs.”

Very disappointed for the result. We must remain focused for Tuesday! pic.twitter.com/Cx4PPjVDWT

The 20-year-old starlet only arrived at Signal Iduna Park in January 2020, yet already looks set to leave in the near future, while he also reportedly has a £65m release clause that comes into effect next summer.

While it would be a real blow for Dortmund to lose their star man to their rivals, it would certainly not be the first time that they have seen a key player move on to the German giants.

The likes of Mats Hummels and Mario Gotze have made the switch in recent years, while back in 2014, Poland international Lewandowski famously secured a move to Bayern on a free transfer.

Since then, the forward has hit a staggering 283 goals in just 322 appearances for his current club, with this campaign having seen him already hit 31 Bundesliga goals.

See also – The slow death of the selfish number 9: Why centre-forwards are going out of fashion