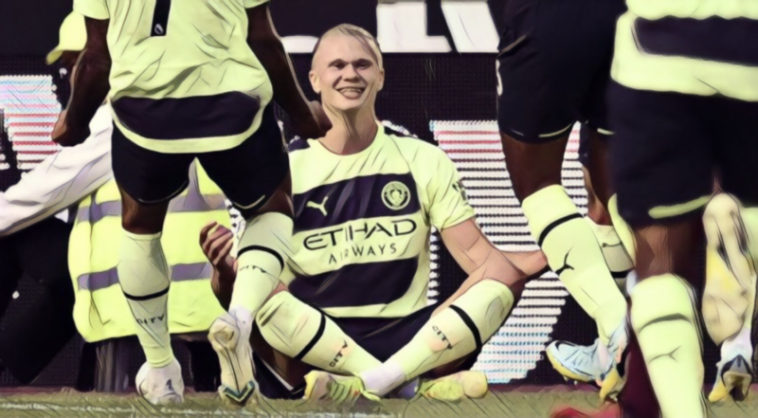 Manchester City got their Premier League campaign off to a perfect start with a comfortable 2-0 away win over West Ham.

Roared on by a sell-out London Stadium West Ham started in fine fashion, with David Moyes’ side pinning the Premier League champions back and both Jarod Bowen and Michail Antonio went close to opening the scoring in the first few minutes.

However, the game soon began to take on a familiar feel with Man City dominating possession and probing to get in behind a well-drilled West Ham defence.

Then on 36 minutes the game really sprang into life when star signing Erling Haaland produced a smart piece of movement to get on the end of an Ilkay Gundogan through ball and as the big Norweigan got to ball he was taken down by Hammer ‘keeper Alphonse Areola. Referee Michael Oliver duly pointed to the spot and Haaland stepped up to fire a penalty into the bottom corner for his first Premier League goal.

West Ham began to push forward in search of an equaliser as the second-half began, but that inevitably left gaps at the back and on 65 minutes the home side would be ruthlessly punished. Kevin de Bruyne found himself in space in the centre of the park and Haaland used his devastating pace to latch on to the Belgian’s through ball and slot home a confident finish.

City saw the game out comfortably thereafter with most West Ham players happy to hear the final whistle after they spent much of the afternoon chasing shadows.

Speaking afterwards Haaland somewhat ominously warned that he will get even better the more time he spends with his new teammates.

“It was good. It was special that he [Dad, Alfie] came to the game and it was a proud moment for me and my family,” Haaland told BBC’s MOTD.

“You used to write words. There is nothing more to say I’m surrounded by amazing players and it is early in the season and we have to get in shape.

“I tried to go out and enjoy a beautiful game. It was my dream when I was young to live for this and play every week.

“There were some good balls and this will come even more when we practice this in training.”