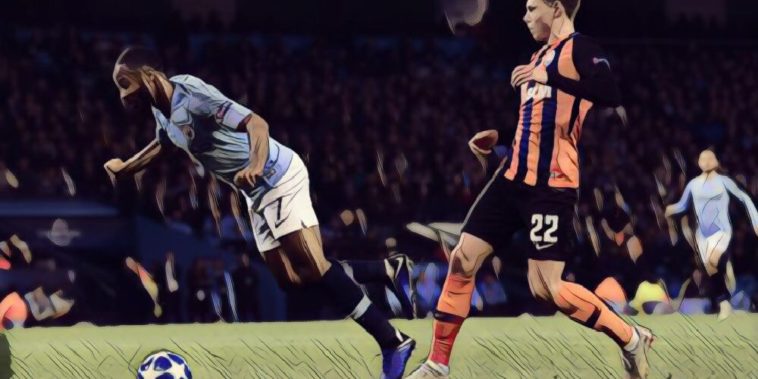 Pep Guardiola has revealed that Manchester City’s players have been giving Raheem Sterling some stick following his hilarious fall in the box earlier this week.

With Man City 1-0 up in their Champions League tie against Shakhtar Donetsk, Raheem Sterling burst into the penalty area before he was seemingly upended, with the referee pointing to the spot.

However, replays clearly showed that there was no contact whatsoever, with the England international actually kicking the Etihad turf before comically hitting the deck.

He subsequently apologised to the referee for conning him, and City boss Pep Guardiola has revealed that his in form attacker has been on the receiving end of some dressing room bantering:

“So we made an incredible performance but all the news is about Raheem, but this situation happens, there was something in the grass, it wasn’t a penalty, that’s all it is not a big issue but in the locker room there was some jokes,” Guardiola told his pre-match press conference.

City went on to beat Shakhtar 6-0, and now face the mouthwatering prospect of the Manchester derby on Sunday.

Last season, City beat Manchester United at Old Trafford, but missed the chance to win the title against their Manchester rivals in the return fixture at the Etihad, when United came from two goals down to win 3-2.