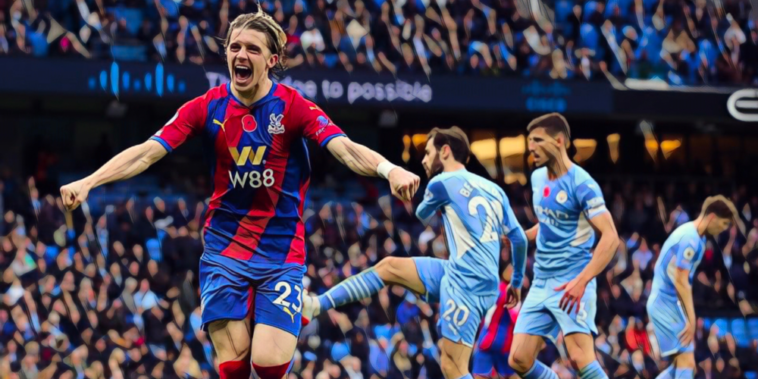 Crystal Palace served up one of the shock results of the day as they ran out 2-0 winners against 10-man Manchester City.

The Eagles have put in some impressive displays in recent weeks, though their results haven’t matched their performance levels, being held to score draws in their last four Premier League outings.

They would however take the lead in just the sixth minute of the contest, the impressive Connor Gallagher pinching the ball off Aymeric Laporte, exchanging passes with Wilfried Zaha whose scuffed finish crept past the dive of Ederson to net his third of the season.

City would only muster a solitary shot on target in the first half, and on the stroke of halftime, their task of getting back into the game would be made all the more difficult as they were reduced to 10 men. A goal kick from Vicente Guaita was flicked on by Odsonne Edouard, with goalscorer Zaha being brought down by Laporte, who was deemed to have denied a goalscoring opportunity.

Despite being a man lighter, City would continue to have the better of the ball and continued to create chances, and they thought they had equalised as Gabriel Jesus poked home Phil Foden’s floated cross, only for the Brazilian’s effort to be chalked off for an offside from Foden in the buildup.

With City pushed forward, Palace broke away and netted the decisive goal with two minutes left to play, Connor Gallagher firing in-off-the-post after Michael Olise had driven into the box and exchanged passes with Zaha.

Speaking after the game, Pep Guardiola was relatively pleased with his side’s overall performance, but admitted his side lacked precision in front of goal.

“It was a tough game,” he told Sky Sports. “We knew it from the last years with Crystal Palace here. They found a goal and after we made a good first half, we did not concede anything but we were not precise.

“It is a long season. We have dropped five points here and we have to do it better.”

Next up for City is a home game against Club Brugge in the Champions League before a Manchester derby against Ole Gunnar Solskjaer’s Manchester United.