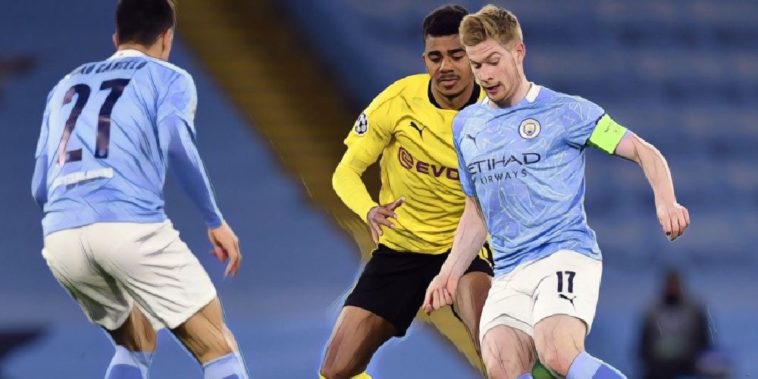 Manchester City left it late to earn a 2-1 win over Borussia Dortmund in their Champions League first leg tie at the Etihad.

It only took 19 minutes for the first goal of the game, a loose Emre Can pass in midfield going straight to Kevin de Bruyne, who went on a driving run towards the Dortmund goal. The Belgian laid the ball off to Phil Foden down the left, who squared it across goal to Riyad Mahrez, before the Algerian cut the ball back to De Bruyne – who had continued his run – to fire home past Marwin Hitz.

Dortmund thought they had an equaliser eight minutes before the interval, 17-year-old English talent Jude Bellingham looked to have capitalised on a loose touch by Ederson, nicking the ball off the Brazilian before finishing into an empty net, only for the Romanian referee to somehow decide the former Birmingham City man had fouled the Man City ‘keeper on the way.

The out-of-form Bundesliga side did get themselves level with just six minutes to play, and while much has been written about Erling Haaland and his ridiculous goalscoring record in recent weeks, the Norwegian dropped between the lines, produced a lovely round-the-corner flick into the path of Marco Reus who coolly despatched a potentially vital away goal.

However, parity didn’t last long, as City restored their lead as the game ticked into added time. A wonderful ball from the supposedly weaker left peg of De Bruyne found Ilkay Gundogan’s run towards the back post, the German playing it back to Phil Foden who swept the ball home past Hitz, a goal that would give the Premier League leaders a slender advantage going into next weeks second leg.

Speaking afterwards, Pep Guardiola admitted his side wasn’t at their best at times as he looks to steer Man City beyond the Champions League quarter finals for the first time under his management of the club.

“Better to win than draw. 2-1, Champions League, we are going there to win the game,” he told BT Sport.

“In the first half, we were not clever with the ball. The second half was much better, we had two or three clear chances to score the second and third but it didn’t happen. After we concede 1-1 we scored the final goal.

“Dortmund are strong, a good quality with the players they have and the quality it is difficult to do what we want to do it but 2-1 and we have a good chance next week.

“We are going to watch the game. We will adjust a few things to go there and try to win the game. Next Leeds and then we go to Germany to try and win the game.

“Borussia Dortmund is a typical club from the Champions League. We have one more game there and with the result 2-1 we will try to score the goals there to win.

“We are going to analyse what we have to do like we have done for four or five months. Every game we play to win.”

Next up for City is a potentially tasty visit of Marcelo Bielsa’s Leeds before next week’s second leg in the Westfalenstadion.

Iconic: Five of the greatest hat-tricks in Champions League history