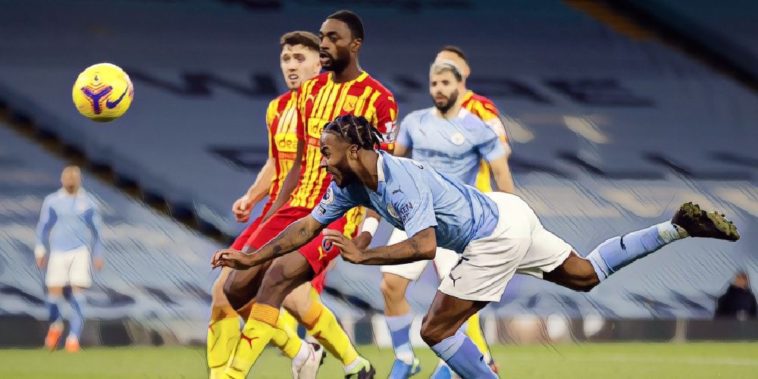 Unsurprisingly, Man City dominated the game from the off as West Brom looked to sit back a stifle a side that has struggled to break teams down in recent weeks.

City did, however, break the Baggies after 30 minutes of the game, Raheem Sterling being played into the right-hand channel before cutting the ball back to Ilkay Gundogan who swept his strike home first time past Sam Johnstone.

However, with two minutes to play of the first half, the Premier League strugglers hauled themselves level. City – who had just gone past the 10 hour mark without conceding – failed to clear a free-kick, and when the ball dropped to Semi Ajayi, the defender held off his man before firing towards goal, the Nigerian’s effort taking a wicked deflection off Ruben Dias and past Ederson.

While City have been improved at the back this season, their usually devastating attack has been somewhat dulled, and while they continued to dominate after the break – enjoying 76% possession throughout the game and having 26 attempts – they were continually frustrated by a determined West Brom backline, and some inspired form from Johnstone in between the sticks, the former Man Utd ‘keeper making a number of vital saves.

Speaking afterwards, Pep Guardiola admitted his side are ‘struggling’ in front of goal, insisting his side ‘have to win’ games against such opposition if they are to fight for the top honours as in previous years, their record of 20 points and 18 goals from 12 games their worst under the Catalan since he took over at the Etihad.

“We didn’t create much in the first half, they had a lot of people back, we struggled to win the second balls. In the second half we did everything we just couldn’t score,” he told Amazon.

“We created enough to win the game, 26 shots I think, you just have to put the ball in, We are struggling with that. We have to be optimistic.

“You don’t have to be so clever to see the gap between this year and previous years [in our results]. It is not confidence, Sergio Aguero is injured for four months, but we create chances, we are there we just can’t score.

“This situation is weird for everyone. We deserved to win the game but we didn’t win it.”

Next up for Guardiola’s side is a tricky away trip to face an in-form Southampton side at the weekend.