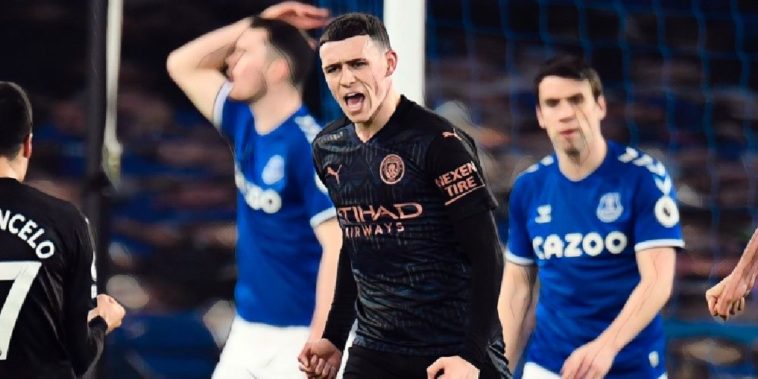 Manchester City recorded their 17th straight victory to move 10 points clear at the top of the Premier League with a 3-1 win over Everton.

The game was Manchester City’s game in hand, the original fixture having been postponed at the last minute due to an outbreak of Covid-19 within the City camp back in December.

Man City have been in sensational form in recent weeks, and they quickly got into their groove at Goodison Park, creating plenty of early chances with Gabriel Jesus a particular livewire.

They finally got their breakthrough in the 32nd minute, Riyad Mahrez’s cross being cleared by Michael Keane but only into the path of Phil Foden, the Englishman’s strike taking a wicked deflection off Everton club captain Seamus Coleman to see the ball go beyond Jordan Pickford.

Everton quickly pulled themselves level though, Coleman standing a cross up towards the back post, the ball being met on the half-volley by Lucas Digne. The Frenchman’s effort came back off the far post but fortuitously hit Richarlison and into the back of the net – the Brazilian knowing little about his decisive touch.

City again came out quickly in the second period with Pickford making a low save while Gabriel Jesus fired over within the first 10 minutes after the interval.

In the 65th minute, though, the league leaders regained their lead in sensational style. The Citizens knocked the ball about effectively and efficiently before Riyad Mahrez crashed an unstoppable strike beyond Pickford, the Algerian curling the ball in off the post with his left in trademark fashion.

10 – Manchester City are now 10 points clear at the top of the Premier League – the only two teams to fail to go on and win the title having had a lead of 10+ points are Newcastle United in 1995/96 and Manchester United in 1997/98. Cruising. pic.twitter.com/3ilRLBXtmZ

The third came in similarly delicious style, Bernardo Silva picking the ball up from a Gabriel Jesus layoff, taking a touch while on the move to set himself before firing past Pickford, the England number one getting a hand to the Portuguese’s striker but unable to keep the ball out of the back of the net.

“A real tough game, pitch in not perfect condition in winter and they are so physical team,” the Catalan told Amazon Prime Sport. “A solid performance, the guys run like the way we have to do and three points.

“We have the quality up front but it comes through the passes and when we arrive in the final third we want to attack too quick, we have to have patience. The second goal is an example of that, if you can’t find (the opening), make an extra pass.

“Sometimes Riyad Mahrez plays left, sometimes right, it depends on the decisions for the team.”

City haven’t been behind at all in a game in their last 16 Premier League games, and Guardiola was keen to point out the how dangerous Everton have been in recent weeks against a number of big sides.

“Football is not about defensive, offensive,” he said. “You cannot win titles [without a good defence] and we have conceded few goals and few chances. This [Everton] team scored three at Old Trafford and five against Spurs and a team that can create chances.”

Next up for Manchester City is an away trip to face Arsenal at the weekend before they resume their pursuit of Champions League success with the first leg of their last 16 tie against Borussia Monchengladbach next week.

See also – Fantasy Premier League: How to get the most out of your chips in the coming gameweeks