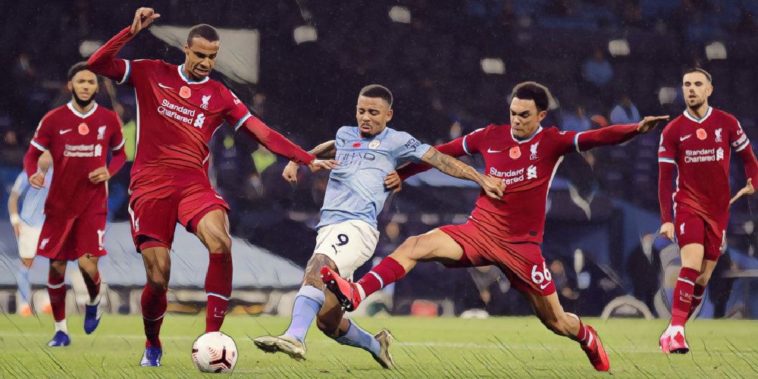 It was a frenetic start to the game in East Manchester, and Liverpool took an early lead from the spot after 13 minutes, Mohamed Salah confidently firing past Ederson after Sadio Mane was brought down in the box by Kyle Walker.

City had dominated the ball but had struggled to create too many opportunities in the opening 30 minutes. However, when Kevin de Bruyne received the ball in a pocket of space, the Belgian playmaker picked out Gabriel Jesus who produced an excellent turn to spin Trent Alexander-Arnold before toe-poking the ball past Alisson.

10 minutes later and City had a chance to take the lead with a penalty kick of their own, De Bruyne’s cross striking the arm of Joe Gomez in the box. However, in the most uncharacteristic fashion, De Bruyne stepped up and screwed his effort wide of Alisson’s right-hand post.

After a first half that was at times breathless, the second half was somewhat more controlled, with neither side creating too many clear cut opportunities to grab a winner.

1 – Kevin De Bruyne's penalty is the first to miss the target completely in a @premierleague game since October 2018, when in the same fixture at Anfield, Riyad Mahrez blazed over against Liverpool for Manchester City. Spooky. #MCILIV pic.twitter.com/OesSCn9NSk

Speaking afterwards, Guardiola admitted a draw in a ‘tight game’ against a title rival was a fair result.

“A tight game, they started well, we conceded a goal and conceded a penalty like at Leicester,” he told Sky Sports. “It was tight, in the second half we had a few more clear chances but a draw is a fair result.

“It is not easy to defend against Liverpool, normally they have three in attack and now four, they ran in behind and you cannot stay there and they play in between the players.

“It is not easy to play but we adjusted a bit and had more courage to stay high. We made a good goal and unfortunately we missed a penalty. In games or opponents like Liverpool, if you miss a penalty is it more difficult.

“Three games, three goals for Gabriel Jesus, he did not train much so he did really good.

“When you cannot win in 80-85 minutes, you cannot lose it. When you play against a contender like Liverpool, you have to try and win but you cannot lose. We know each other quite well.

Gabriel Jesus: “We want to win the league!”

Guardiola was once again vocal about the Premier League‘s decision to scrap the five subs rule, with Trent Alexander-Arnold having picked up a calf injury which is set to rule him out of international duty next week.

“Trent Alexander-Arnold, international English player, now injured,” he said. “Here we believe we are more special, we don’t protect the players, so that is why it is a disaster. This calendar came from a year before and I will demand for players to come back otherwise it will be difficult to maintain it.”