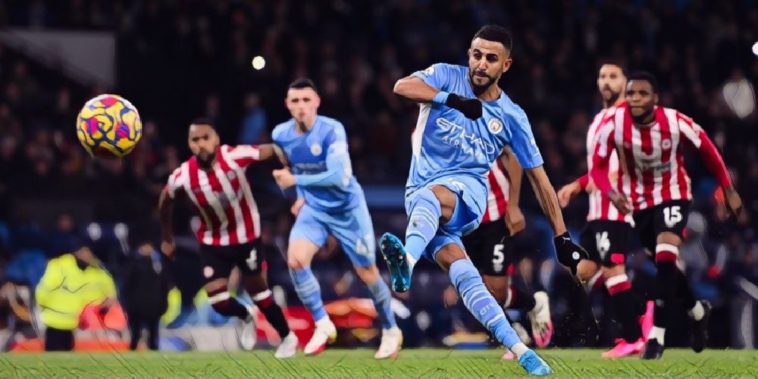 Manchester City moved 12 points clear at the top of the Premier League with a dominant 2-0 win over Brentford at the Etihad on Wednesday evening.

Pep Guardiola’s side quickly settled into their familiar possession-based style, with Brentford looking happy to sit back and attempt to repel the league leader’s attacks in the opening stages.

After all their dominance, City’s breakthrough would come with five minutes of the first half to play. City won the ball back high up the pitch before Raheem Sterling made a driving run into the area. Danish wing-back Mads Roerslev went to ground and got nothing of the ball as he brought the England international down.

Riyad Mahrez stepped up to take the resulting penalty, and having netted twice in the FA Cup win over Fulham, the Algerian made no mistake once more as he emphatically fired into the top corner for his 16th of the season.

City continued to dominate after the break, and with 20 minutes left to play they would have their second. Brentford ‘keeper David Raya played an awful pass out that went straight to Sterling, and while the Spaniard did well to keep out the forward’s strike, the ball dropped straight into the path of Kevin de Bruyne who ruthlessly punished the ‘keeper’s mistake.

The reigning champions continued to dominate proceedings through to its conclusion, and Pep Guardiola said he was pleased with his side’s ‘patient’ performance, saying that Thomas Frank’s side are ‘so difficult’ to play against.

“They are so difficult to attack,” he told BT Sport. “Aggressive, high pressing, we build up they drop and defend so deep. Be patient, make no mistakes and in the end we got the result.

“Very satisfied with the performance. We conceded just one shot, a few corners, didn’t conced stupid free-kicks where they are so good and were patient. Difficult when they defend deep with 10 players in their 18-yard box.”

Unsurprisingly, the Catalan refused to get carried away by his side’s 12 point advantage at the top of the Premier League, though did admit his side have done ‘incredibly well’ to reach the 60 point tally after 24 games.

“Liverpool have two games to play then we see the gap – 14 games to play, many points to play for and more tough games like today.

“Everyone is tough competition, but it is impressive at this stage to have 60 points – we have done incredibly well so far.”

Next up for the Citizens is an away trip to face Norwich before the first leg of their Champions League last-16 tie with Sporting Lisbon next week.