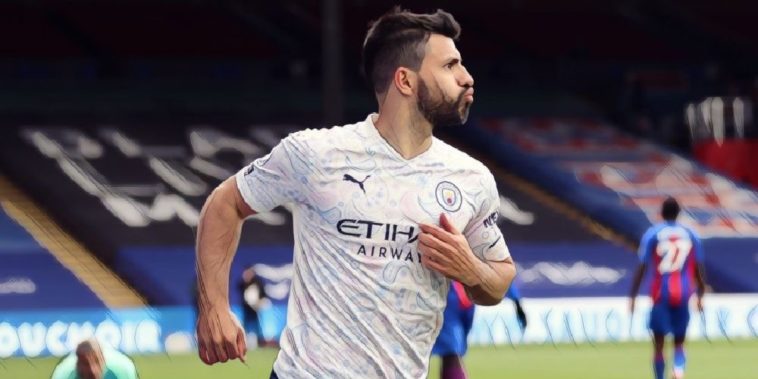 Manchester City moved to within three points of the title as they ground out a 2-0 win over Crystal Palace at Selhurst Park.

Once again, Pep Guardiola made eight changes to the side that beat PSG in midweek, including starting both Gabriel Jesus and Sergio Aguero, and the Premier League leaders looked sloppy from the off, as they regularly saw their attacks break down, and failed to get a shot on target in the opening 45 minutes.

In fact, the best chance of the opening half fell to Crystal Palace, Christian Benteke’s effort from two yards being saved by the legs of Ederson following a driving run into the box by right-back Joel Ward.

With almost all of their most creative players on the bench ahead of their Champions League semi-final second leg against PSG in midweek, City looked to be struggling for ideas and invention. However, in the 57th minute, they would take the lead with a goal out of nothing. Benjamin Mendy found Sergio Aguero in a pocket of space, the club record goalscorer’s touch seeing the ball pop up perfectly for the Argentine who lashed it into the back of the net with a typically thunderous effort.

Incredibly, just 84 seconds later, the champions-elect doubled their advantage with what was just their second shot on target; the Citizens passing the ball around with more pace before Ferran Torres stroked past countryman Vicente Guaita from the edge of the box.

Joao Cancelo saw an effort whizz narrowly over the bar in what was the closest City would come to extending their lead as they saw the game out without any real drama, and speaking afterwards, Pep Guardiola was delighted with his side’s improved second-half display.

“I’m so incredibly satisfied,” he told Match of the Day. “After the Champions League, it’s always difficult. We made many changes. The players were sad because they wanted to play, but they did what they had to do. The first half we struggled, but that’s normal – you need patience and time.

“For the quality of players we had on the pitch, we should have attacked the way we did in the second half. We are one step closer – one more game and we will be champions.

Asked about Sergio Aguero’s strike, the Catalan was effusive in his adoration for the departing striker: “How many times has he done it? What a goal, what a player and what a man. I’m completely in love with him. The people cannot believe it but we’ve missed him. We haven’t been able to use him many times, but maybe we got him back at the right time. He knows he has a special quality.”

City need three points to claim the title, though a Liverpool win over Manchester United on Sunday will see them crowned champions by the end of the weekend, and Guardiola was asked if he will be watching: “We’re going to think about it. Tomorrow I will take a look. It’s in our hands – four games, one victory and we will be champions. I’m really impressed by the way we’ve done this Premier League. We are close.”

See also – Pep discusses why he likes his ‘team of midfielders’