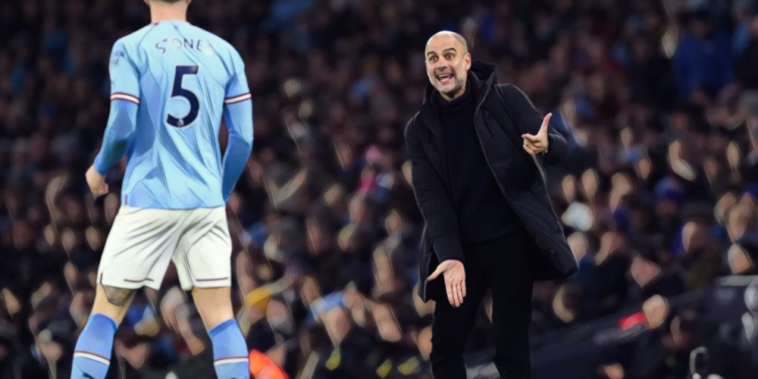 City moved within five points of the Premier League leaders after a 4-2 win over Tottenham at the Etihad on Thursday evening, but the champions were forced to come from 2-0 down to earn all three points.

Spurs scored twice in the final minutes of the first half to take a two-goal half-time lead, before goals from Julian Alvarez, Erling Haaland and a Riyad Mahrez brace turned the game around.

Guardiola was pleased with the result but admitted City are not performing to their usual standards at present. The Spaniard said that he doesn’t ‘recognise’ City on current form and believes his team will not catch the league leaders unless performances improve.

“We are far, far away from being able to compete at the highest level,” he said. “[We lacked] guts, passion, fire, desire to win from minute one. The same with the City fans, they are silent for 45 minutes. I want my fans back.

“In 14 years, I won 11 league titles, that’s a lot so it means every day I see things you cannot see because you’re not there.

“I’m incredibly happy with the result, but it’s not about that. Do you think we are going to chase the gap to Arsenal the way we are playing? No way. We have an opponent in Arsenal who have the fire. Two decades without winning the Premier League.

“I am explaining the reality, everything is so comfortable but opponents don’t wait. I don’t recognise my team, they [previously] had the passion and desire to run.

“We are far away from the team we had in previous seasons. Do you think this comeback will happen every time? It won’t.”