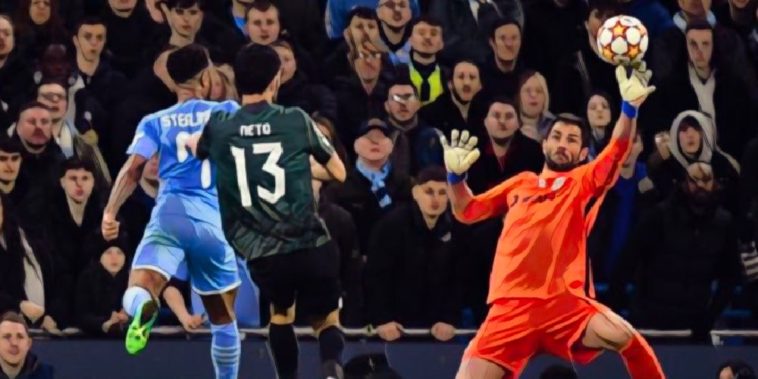 Manchester City booked their place in the Champions League quarter finals after a goalless draw with Sporting Lisbon at the Etihad.

Manchester City came into the game with a comfortable aggregate lead following their 5-0 win in Lisbon last month, though Pep Guardiola still sent a strong side out as they looked to book their place in the quarter finals.

As you would expect, City were dominant from the off, though couldn’t find a breakthrough with Raheem Sterling going closest in the first half, Antonio Adan tipping the England international’s effort over the bar six minutes before the interval.

Riyad Mahrez did have the ball in the back of the net shortly after the restart, though it was ruled out by VAR who deemed Gabriel Jesus to be inches offside in the buildup.

Sporting did pose City a few questions at the other end, though the game ultimately ended in a goalless draw, with the Premier League side joining Liverpool, Bayern Munich and Real Madrid as the first four sides in the draw for the quarter-finals.

Speaking after the game, Pep Guardiola was keen to praise the performance of youngster CJ Egan-Riley who made his Champions League debut

“I am very pleased because in both games we deserved to be in the Champions League quarter-finals,” he told BT Sport.

“CJ Egan-Riley played really good and didn’t miss one ball. He is a seven. He is nothing exceptional in anything but that is a good sign as a defender as he doesn’t make mistakes. Scott Carson could play and we gave 45 minutes to the other guys.”

Scott Carson made his first Champions League appearance since 2005, and he made a crucial save late on to deny Paulinho.

“Yeah really good! He deserves it,” said Pep. “He is so important to us in the dressing room. It was good for him.”

City are among the bookmaker’s favourites to win a maiden Champions League crown, and the former Barcelona and Bayern Munich boss said it was ‘a good sign’ that there are higher expectations being placed upon his side.

“It’s a good sign,” he said. “The people didn’t care what we were and now step-by-step the club grew and now for many years we are there in this competitions.

“Now we are again in the quarter-finals as the best eight teams in Europe. I learn to enjoy the moments. I celebrate it because I know how difficult it is. When you go through every opponent is difficult. Now it’s time to congratulate everyone, focus on the Premier League then next week we will see the draw.”