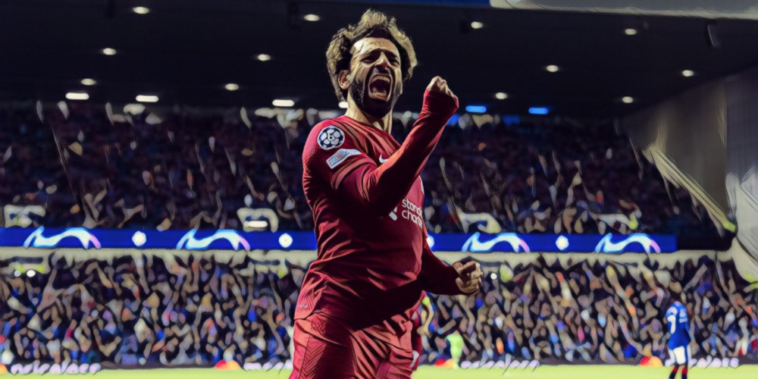 Mohamed Salah made Champions League history this week after coming off the bench to score a stunning hat-trick in Liverpool’s win at Rangers.

The Egypt international came on as a substitute and produced a masterclass in finishing at Ibrox, scoring three times in a little more than six minutes to help Liverpool to a 7-1 win and set a new Champions League record.

Match-day two in the Champions League group stages of the 2014/15 campaign saw a record number of goals scored across just eight fixtures, with Chelsea, Bayern Munich and Shakhtar Donetsk all scoring 6+ goals in convincing victories.

The latter’s success came as they hit seven without reply at BATE Borisov, with forward Luiz Adriano writing himself into the history books following a sensational individual display.

Adriano became just the second player – after Lionel Messi – to score five times in a single Champions League fixture, including a hat-trick within the space of just 12 minutes as the Ukrainian side ran riot.

🔥 The first one after Messi 💥

⚽⚽⚽⚽⚽ @LuizAdriano_9 recalls his 5 goals in the @ChampionsLeague match for #Shakhtar ⚒ #UCL pic.twitter.com/6As4BdY1tc

Just two weeks later, the Brazilian scored another hat-trick against the Belarusian minnows, becoming the first player in history to score Champions League hat-tricks in consecutive games, a feat only since matched by Cristiano Ronaldo and Karim Benzema.

Bayern Munich reigned supreme with a flawless run to a fifth European crown in 2019/20, their success fired by a sensational season from Robert Lewandowski.

Bayern became the first side in history to win every single fixture on their way to winning the trophy, including a group stage thrashing of Red Star Belgrade that saw Lewandowski take centre stage.

The Poland international scored an incredible 10 group stage goals in just five fixtures, netting four times against the Serbian outfit including a hat-trick within just 12 minutes.

Lewandowski opened his account from the penalty spot, before twice netting from close range as Bayern cut through the host’s defence with ease. His fourth goal took his extraordinary haul for the season to 27 goals in just 20 appearances in all competitions.

He finished the campaign with a staggering 55 goals in all competitions and in possession of Bundesliga, DFB-Pokal and Champions League winners’ medals.

Real Madrid equalled the Champions League’s biggest ever winning margin during an eight-goal thrashing of Malmo during the 2015/16 season, with Cristiano Ronaldo scoring four times in an emphatic victory at the Bernabeu.

The Spanish giants had cruised into a three-goal half-time lead courtesy of Karim Benzema’s double and a Ronaldo strike, before the latter netted twice more early in the second period to make it three goals in just 11 minutes either side of the interval.

Ronaldo added a fourth eight minutes later, before Mateo Kovacic made it seven. Benzema completed his own hat-trick to complete the rout.

It was incredibly the second of three hat-tricks Ronaldo scored in the competition that season as Real Madrid were crowned champions of Europe. It is the most trebles any player has ever scored in a single campaign.

The Italian side arrived in the competition amid much excitement following the domestic success of their free-scoring style, but soon discovered the Champions League was a step up after being dismantled at the Etihad.

Sterling was the star of the show in a brilliant display, as he provided an assist for Sergio Aguero and won a penalty for the same player to convert before taking over with a ruthless display of finishing.

The visitors had no answer for Sterling’s speed and movement as he helped himself to a hat-trick within just 11 minutes, the Premier League side too good and too clinical for their Italian opposition.

Lewandowski features for a second time on this list after a quick-fire hat-trick against Red Bull Salzburg during the 2021/22 campaign.

Bayern Munich had required a late equaliser to rescue a draw in the first leg, but turned on the style in the second to score seven goals and ensure their place in the quarter-finals.

Lewandowski’s hat-trick came inside the opening 23 minutes as the Poland forward scored the earliest ever Champions League treble. He netted twice from the spot before scoring a fortuitous third as he closed down goalkeeper Philipp Kohn’s attempted clearance.

After having zero attempts on goal in the first-leg, Robert Lewandowski has a hat-trick against Salzburg in under 23 minutes 😱

Lewandowski’s hat-trick saw him reach 85 goals in the Champions League in just 104 appearances, faster than both Cristiano Ronaldo (121) and Lionel Messi (107) achieved the feat.

Blackburn entered the 1995/96 edition of the Champions League as Premier League winners following a first title success in 81 years, as the heavy investment of owner Jack Walker propelled the Lancashire side into Europe’s elite.

Their first venture into the tournament ended in disappointing fashion, however, as Rovers were eliminated in the group stage, losing four and drawing once in their opening five fixtures.

Blackburn saved complete embarrassment with a comfortable victory over Rosenborg in their final fixture, with Mike Newell breaking the record for the fastest ever Champions League hat-trick at that time.

Alan Shearer had opened the scoring from the penalty spot for Rovers, before Newell – who had spent much of the previous season as back-up to Shearer and Chris Sutton – scored three times in nine minutes, netting a perfect hat-trick of left foot, right foot and header.

It took just nine minutes for Mike Newell to score the perfect @ChampionsLeague hat-trick on this day in 1995. #Rovers pic.twitter.com/3DADwlTwEQ

Newell’s nine-minute blitz came despite Rosenborg having time to pull one back shortly after his first effort and saw him become the first English player to net a treble in the Champions League.

Bafetimbi Gomis became a familiar face to Premier League supporters during a two-year spell at Swansea City, though the forward arrived in English football as a Champions League record-breaker following this hat-trick for Lyon in 2011.

Gomis helped Lyon advance to the knockout stages on goal difference courtesy of a thumping win at Dinamo Zagreb, scoring four times as the French side came from behind to humiliate the hosts.

The forward had the simplest of tasks to tap in a looping cross on the goal-line for his first, before an emphatic right-footed finish was followed by another close-range effort to write history.

Gomis’ hat-trick eclipsed Newell’s previous record and the Frenchman later added gloss to a memorable occasion with a fourth goal of the evening.

Mohamed Salah is the new record holder for the fastest ever Champions League hat-trick. Salah came off the bench to score three times as Liverpool thrashed Rangers, in a Battle of Britain that proved more an invasion at Ibrox.

Salah was named among the substitutes but took just seven minutes to score his first after entering the fray, as he collected Diogo Jota’s pass to fire home. The Egyptian’s razor-sharp movement and footwork saw him score twice more, with his hat-trick timed at just six minutes and 12 seconds.

His record-breaking hat-trick wasn’t the only milestone of the evening for Salah, who has also now scored a record number of goals for an English club in the Champions League with 38. His treble saw him move past Didier Drogba (36 – Chelsea) and Sergio Aguero (36 – Manchester City) to add another landmark to his increasing collection.

After a tough start to the season, Salah looked back to his best in Glasgow.