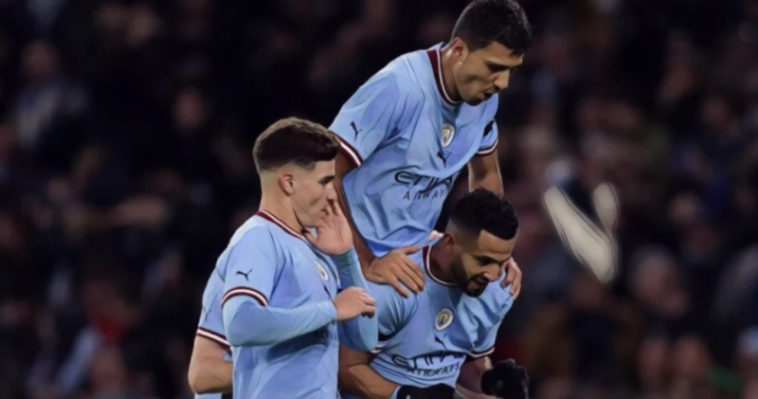 Manchester City are through to the fourth round of the FA Cup after they comfortably beat Chelsea 4-0 tonight at the Etihad.

Riyad Mahrez scored the winner when these sides met in the Premier League last Thursday and on 23 minutes the Algerian winger would open the scoring for Man City. Mahrez was taken down 25 yards from goal by young defender Lewis Hall and the former Leicester man duly stepped up and curled a wonderful free-kick into the top corner.

On the half-hour mark Man City would go two up via a penalty from World Cup winner Julian Alvarez after Chelsea forward Kai Havertz handled the ball in the area.

If the game wasn’t already over as a contest it certainly was seven minutes later when Phil Foden calmly steered a Kyle Walker cutback past Kepa and into the Chelsea goal.

Pep Guardiola’s side further showed their dominance five minutes from the end when Mahrez fired home another penalty after Kalidou Koulibaly clumsily took down Foden in the area.

City’s reward for winning tonight will be a fourth-round fixture at home against either Oxford United or title rivals Arsenal.

Pep Guardiola has never lost in the first round of a domestic cup competition with Barcelona, Bayern Munich or Manchester City. 👍 pic.twitter.com/4xTyInjfHT

“The quality of Riyad is everything. He loves to play football, he helped us to play the game,” Guardiola reflected on Mahrez’s performance.

“It was really good. It was a fantastic free-kick. He played an outstanding game.

“He never lost his love. He loves to play football. The way he is training now and playing was exactly the same in Abu Dhabi. Riyad in important games is fantastic.

“The last game he didn’t start at Stamford Bridge and the impact he had was incredible.

“When they play in this way, and maybe complain [about not playing every game] I say ‘yes, you’re right’.

“Before, he cannot complain because he wasn’t playing at the level he is now. It’s not just about quality, it’s more in football, you have to do more.

“[But] now since we came back for World Cup, he is playing really, really well.”