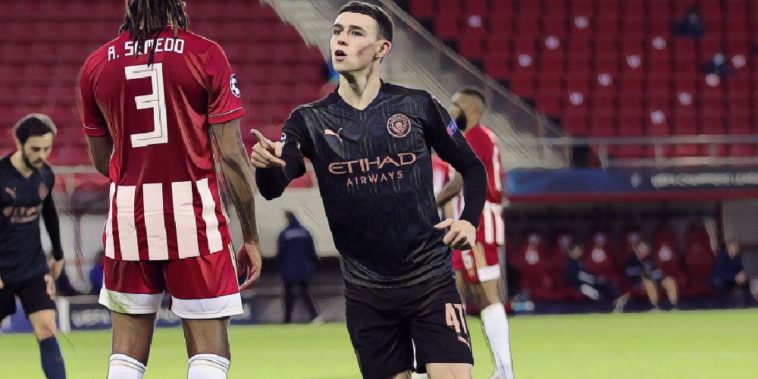 Manchester City booked their place in the Champions League knockout stages with a 1-0 win over Olympiakos in Athens.

It was a thoroughly dominant display from the Premier League side, who peppered the Olympiakos goal throughout, the Greek side at times struggling to get out of their own half.

Man City have struggled for goals this season, however, scoring just 10 in their eight league games, with Pep Guardiola having been forced to field questions as to whether his side have been worked out in recent weeks.

However, after 27 minutes of domination, Guardiola’s side eventually found a breakthrough, Ilkay Gundogan clipping the ball into Gabriel Jesus, who in turn released Raheem Sterling inside the penalty area. The England international, approaching the byline, played a classy backheel into the path of Phil Foden who slotted home first time from eight yards.

City’s domination continued throughout the second half, but despite a number of good chances, they struggled to break down their deep-lying opponents, whose first attempt in the game didn’t arrive until the 88th minute.

Speaking afterwards, Guardiola was however confident that goals will eventually start flowing for his side.

“Incredible, unfortunately, we couldn’t score more goals,” he told BT Sport. ” I don’t know how many times we shoot on target.

“We played really, really well in all departments. We are in the next round and can focus on the Premier League and other competitions.

“We would love to score more but it will come and one day we will break everything.”

Next up for the Citizens is a home game against Burnley, their 2-0 loss to Tottenham at the weekend having left them languishing in mid-table.