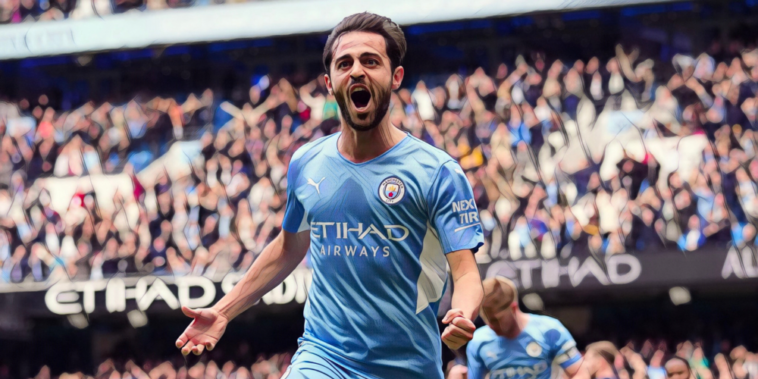 Goals from Bernardo Silva and Kevin De Bruyne fired Manchester City to a hard-fought 2-0 win over a resilient Burnley side at the Etihad on Saturday.

Pep Guardiola had been dealt a blow by the loss of Brazilian duo Ederson and Gabriel Jesus following their recent international involvement, while he also sprung a surprise by handing John Stones his first appearance of the season in place of Ruben Dias – who dropped to the bench.

The previous four meetings between the two sides at the Etihad had all ended in comfortable 5-0 victories for the hosts and it looked like it would be a similar story once again as Bernardo Silva handed his side an early lead with a simple finish on the rebound, after Nick Pope had kept out Phil Foden’s initial strike.

However, unlike in previous years, Man City struggled to build on that lead against Sean Dyche’s spirited side, with the visitors coming agonisingly close to drawing level, only for Josh Brownhill to curl his effort narrowly wide of the post, while summer signing Maxwell Cornet also wasted a one-on-one chance after firing straight at Zack Steffen.

The home side continued to dominate after the break yet still couldn’t build on their slender lead, with Riyad Mahrez notably lashing an effort off the crossbar after an excellent pullback from goalscorer Silva.

The champions did eventually bag a second with less than 20 minutes to play, with Kevin De Bruyne lashing home a typically composed finish on his weaker foot to all-but confirm the win.

Following that victory – which moves City up to second – Guardiola admitted that he was ‘satisfied’ with his side’s performance, particularly in the second-half.

“After the international break it’s always a little bit difficult to come to a rhythm and I know how good Burnley are,” he told the BBC. “They did really well, they have good players and we played a good 15-20 minutes in the first-half, we created chances and the last 20 minutes we lost some tempo.

“We did well in the second half and played really well and could’ve scored more goals. Good result, after the international break we take the victory and look what’s next.

“We run and fight for every ball, Burnley play for long balls and they’re a master at this. You have to defend set-pieces well and anything could’ve happened if Chris Wood had scored that goal near the end. We had chances but couldn’t score more unfortunately.

“The importance is improving our game I am satisfied that the second-half was better than first. The team showed me the way we want to play and the shape we want to play in. All the guys gave everything, it doesn’t matter if the performance is good or not, it’s important that you fight for your teammates and everyone was incredible.”

The former Barcelona boss opted to include England duo John Stones and Raheem Sterling from the start – both of whom have struggled for game time of late – and was left impressed by what he saw from both men.

“Both played really well – it was a difficult game,” he said “I tried to tell them to forget about previous 5-0 because Burnley always fight and never give up and are able to go to any stadium and create a problem and know what they have to do so I give a lot of credit to them today.”

Manchester City are next in action away against Club Brugge in the Champions League on Tuesday, before they host bottom side Norwich City in the Premier League on Saturday.