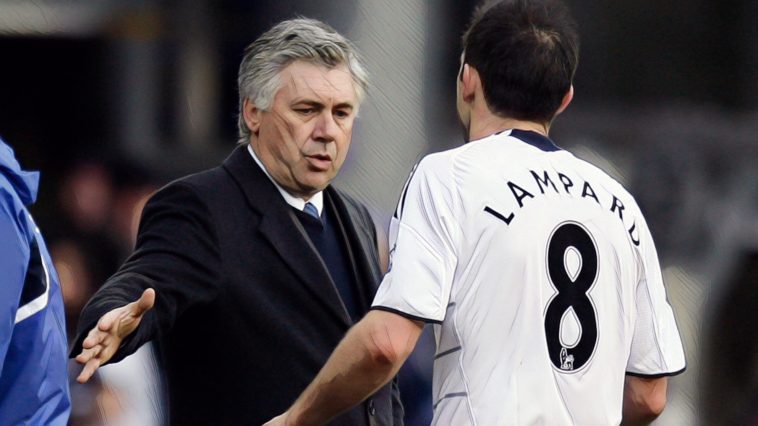 Frank Lampard has called Carlo Ancelotti a ‘great coach’ and a ‘great man’ ahead of a reunion with the former Chelsea manager this weekend.

Chelsea travel to face Everton in the Premier League this weekend in a clash which will see the west London side face former boss Ancelotti, the Italian having spent two seasons in charge at Stamford Bridge between 2009 and 2011.

Lampard formed part of the Chelsea squad which won a domestic double under Ancelotti’s management during the 2009/10 campaign, and admits he is relishing the opportunity to go head-to-head with the now Everton boss this weekend.

The 42-year-old admits he would never look to copy the management style of any coach, though hailed Ancelotti’s influence and says the three-time Champions League winner is one of the best he worked under during his own playing career.

“I’d never try to take something from someone as such but I was heavily influenced by him as player and as a man,” Lampard told his pre-match press conference.

“He is right at the top when I speak about the managers I’ve worked with for everything about him, the huge success he has had at a number of clubs.

“One to one I found him to be a great coach, a great man and I look forward at all times to seeing him and speaking to him.”

Chelsea head into this weekend’s fixture on a 14-game unbeaten run in all competitions and have not lost in the Premier League since September, the west Londoners currently third in the division and two points behind both Liverpool and league leaders Tottenham.