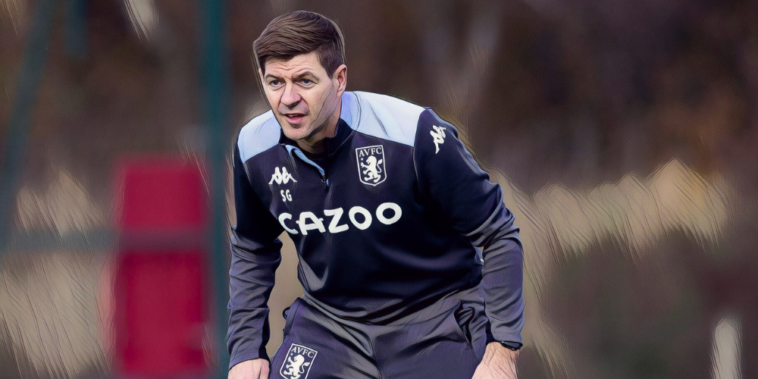 Steven Gerrard admits he was disappointed with the timing of the international break as Aston Villa prepare to face Leeds in the Premier League tomorrow.

Villa have made a positive start since Gerrard’s arrival as manager in November, with the club having headed into the international break after taking four points from fixtures with Manchester United and Everton.

Villa host Leeds on Wednesday evening in search of back-to-back league wins and Gerrard admits he was disappointed to see the international break halt his side’s momentum.

Asked whether the break had been good timing for his squad, he told his pre-match press conference: “Quite the opposite, in all honesty, because as a manager, as a team, as a squad, we felt that we were in a real good place going into the Everton game.

“We put in a right good, strong performance and the feeling was good. I think when you feel like that you want the games to come thick and fast. You want to try to build momentum and kick on.

“It’s the second or third time we have had a result like that and there’s been a bit of an interruption; whether it be Covid or an international break. In this situation it was obviously South American games.”

The break has however provided an opportunity for Leon Bailey to edge closer to fitness, the summer signing having endured a frustrating spell on the sidelines with a thigh problem.

“The only advantage from the break is that we’ve had the chance to get Leon Bailey a little closer to the squad,” said Gerrard.

“He’s a really important player here. He’s only days away from being named in a squad – tomorrow will come too soon – so you try to look at the pros and cons really.”

Gerrard joked that he wasn’t looking forward to the clash with Leeds as much as assistant manager Gary McAllister, who won the league title in 1992 during his playing career at Elland Road.

He did, however, reveal his respect for Leeds and says he is looking forward to what promises to be a ‘great fixture’ between the sides.

“He looks for this one more than me, but Leeds are a fantastic club,” Gerrard said. “I have a lot of respect for Leeds – I’ve followed them for many, many years.

“I was lucky enough to go and play at Elland Road on many occasions when I played. They have a great set of fans and it’s a club that has taken a few bumps and knocks along the way, but it seems to be back in a good place.

“I’m sure when they get everybody back and available I think you will see Leeds push – and push hard – but it’s a great fixture and we’re certainly ready for it.”