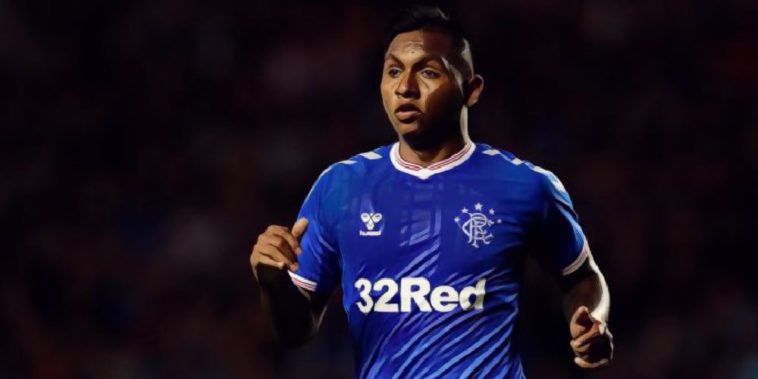 Steven Gerrard has called on his Rangers players to ease the goalscoring burden on Alfredo Morelos and Jermain Defoe as the club look to overhaul Celtic in the race for the Scottish Premiership title.

Rangers currently sit second behind their Old Firm rivals as they bid to secure a first league title in nine years, seven points adrift of Neil Lennon’s side having played a game fewer.

The Ibrox side travel to face Kilmarnock tonight in a must-win clash to keep their title challenge alive, and Gerrard has urged his side to help ease the goalscoring pressure on Morelos and veteran forward Jermain Defoe, who have scored 46 of Rangers’ 98 goals in all competitions this season.

“We don’t want to be a team that relies on one or two individuals,” Gerrard said at his pre-match press conference.

“It’s important that the goals are shared out. It’s nice to see centre-backs contributing from set-pieces and midfielders and number 10s joining in.

“Ryan Kent’s numbers are a lot better than last season so if we can get that collectively around the group, we’re going to win more matches and give ourselves a better chance.”

Morelos has been on the receiving end of racist abuse during his two-and-a-half-year spell in Scottish football, a 12-year-old boy being charged with racist chants towards the Colombian on Monday.

Gerrard says the 23-year-old has the full support of both himself and the club, and insists the forward is in the right mindset to make a valuable contribution to his side’s title charge.

“We always support all the players across the board,” Gerrard added.

“Family is first for me always, so it’s not just with Alfredo, I’m there for all the players to talk to. My door is always open.

“Alfredo’s mindset looked alright at the weekend. I thought he looked like he was getting sharper in the Hibs game. He finished that game really strong then took that form into the weekend and got his goal, which is always important for a striker.

“I had a couple of chats with him after the winter break and he seems like he is OK to carry on playing.”

‘They are aware’ – Rangers striker Morelos flirts with Liverpool