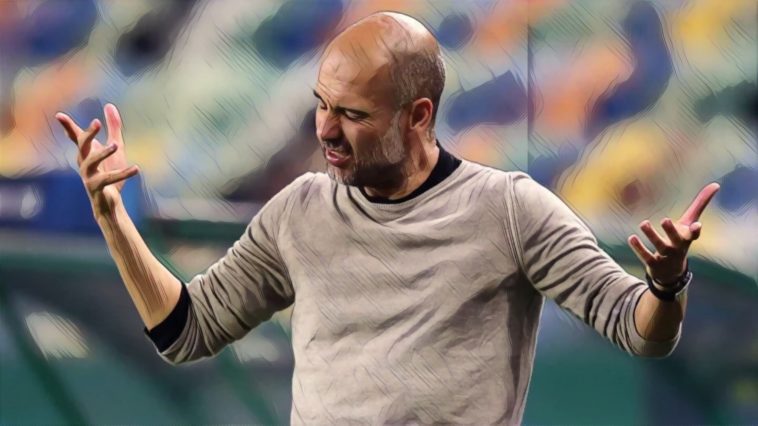 Former Barcelona coach Guardiola suffered further heartache in Europe’s elite competition last month, as his Man City stars were undone by an impressive Lyon side at the quarter-final stage. Despite being one of the pre-tournament favourites to lift the trophy, the 49-year-old once again saw his side fall short, Matthaus’ former side Bayern Munich romped to the title.

Guardiola’s inability to lift the famed trophy since his success with Barcelona back in 2011 has often been a source of confusion and frustration for both himself and the two clubs he has managed since his departure from the Nou Camp – Bayern and City.

At both clubs the quality of player at his disposal has been stellar, yet year-in, year-out, he has appeared to be his own worst enemy, employing unexpected and overcomplicated tactics for the big occasion – his decision to field a somewhat negative starting XI against Lyon spectacularly backfiring, as City slipped to a 3-1 defeat.

🔵 @ManCity in the #UCL under Pep Guardiola:

As Germany great Matthaus explained, it’s not exactly the first time he has made mistakes in the latter stages of the competition: “With Pep Guardiola I have the feeling that he always wants to do something special in big games,” Matthaus told SportBild [via Sport Witness].

“Barcelona had a DNA, a system he pulled through. Pep was successful there. With Bayern and City, he tried it over and over again with changes and failed again and again.

“He always wanted to show that he could do even better. I would like to tell him: Pep, you are a giant trainer – but please keep your system!

“I would describe it as egocentric: Yes, that’s a harsh word, but it is due to what he did: At Bayern, Robert Lewandowski even had to play left wing once. That did not work out at all.”