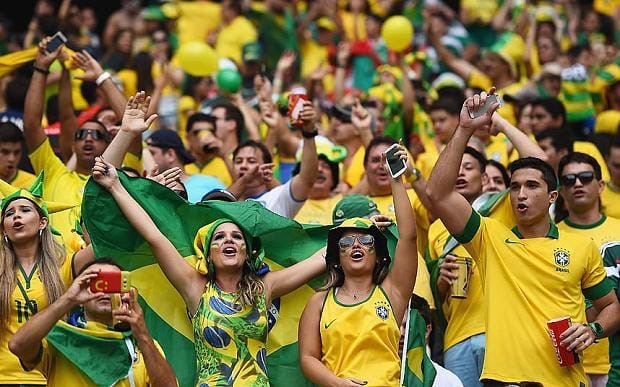 Football is life for many of us, but it is so much more than that for the people of South America.

In the early 1800s, British sailors arrived in Buenos Aires with their favorite sport, football. It soon transitioned from being a rich European’s pastime to an immensely popular, borderline-religious activity. As the sport developed, its popularity affected each South American country in a unique way.

South American history of the last century demonstrates football’s influence in the continent’s culture and politics.

Brazil’s development of a unique style of playing football helped establish the first true united Brazilian identity.  Because of Brazil’s high diversity, an all-inclusive national identity had not been fully established by the 1930’s.

The population was made up of a remarkably high number of different races, mainly European settlers, Africans who originally were brought to Brazil as slaves, and the indigenous people. But football became something that all Brazilians—regardless of race—could love and support. The Brazilians even developed their own unique style of play, later coined Futebol-arte by the legendary Pelé, which is described as favoring “flair and flamboyance” over the traditional European structure and conventionality.

In 1938, the style was even compared by contemporary Brazilian writers to Capoeira, a distinctly Brazilian martial art that combines self-defense and music and dance.  The combination of this profoundly Brazilian style of football with a visibly diverse Seleção national team “gave football the legitimacy to become a cultural representative of nationality.”

The World Cup of 1950, hosted in Brazil, was a sort of completion of this natural process.  “The size of the Maracanã stadium, [then the largest stadium in the world and built for the Cup], produced a new and extraordinary demonstration of collective sociability which could be instantaneously visualised…[additionally], a new form of cheering based on the much larger crowd of supporters came into existence.”  Even though they lost in heartbreaking fashion in the final game, Brazilians nevertheless commiserated together; the unifying force of the loss was similar to that if they had won.  The Final, while disappointing, ultimately “ended up greatly affecting the construction of national sentiment that was underway before…the World Cup.”

Argentinian government organizations have utilized football’s power in society as a source of constructive nationalism, especially in the face of intense political turmoil.  Juan Perón, an influential Argentine president, recognised the “political potential of the sport” to inspire nationalism and rebound from political chaos following the Argentine coup d’état. In 1943, armed forces overturned the corrupt Argentine governmental system.  Juan Perón became the minister of labour directly following the coup. Perón’s decisions in this position (supporting workers and unions) increased his support among the Argentinian population.

When he was forced to resign in 1945, a series of large-scale demonstrations overturned this, and even had him elected into the presidency of Argentina. In office from 1946-1955, “the presence of thousands of spectators at football stadiums every week provided him with a good opportunity to disseminate his political ideals.  Stadiums, competitions, and teams were named after concepts associated with the Peronist movement.”  His strategies were effective:  fans began to associate their love for football with the president, even creating stadium chants including his name, such as “Boca [a popular club], Perón, una corazón [one heart]!” Integrating football and his politics helped Perón become one of the most influential Argentine presidents.

Former Argentine president Juan Peron even has a stadium named in his honour.

After a violent coup d’état, the Argentine Junta used football as a way to promote their image to the people.  In 1976, the military Junta overthrew President Isabel Perón in order to start the Process of National Reorganisation.  Its objective was to “eliminate the threat of communism,” largely posed by the Peronist Montoneros military group, by means of their own Argentine Anticommunist Alliance, which was a similar military group.

While the Junta tried to establish a distinction between a “clandestine terrorist state” in the Argentine Anticommunist Alliance and their own “visible state,” “The illegal clandestine state was corroding and corrupting the state institutions in their entirety.”  Thus the Junta became a source of fear for the Argentine people, and was held in a negative light.  The Junta forced national team manager “César Luis Menotti, a popular character in Argentine society, to praise the actions and policies of the dictatorship, so that they might benefit from a positive association with the popular coach.”

Similarly, they brought the 1978 World Cup to Argentina, which they won, and even bribed one opponent when elimination seemed likely.  The Junta’s willingness to resort to less-than-legal measures underline just how important football was as a source of popularity.

Although football has been a constructive resource for Brazil and Argentina, the violent relationship between Colombian football and the country’s infamous drug cartels demonstrate the caliber of the sport’s deadly power.

Through the 1980s, the drug trade inspired widespread violence and terror across Colombia, “achieving international notoriety as a major narcotics trafficking center” for the nation.  Football only served to exacerbate the widespread nature of this business.  As one player describes it: “football in this country is a sordid business, it reflects the culture completely. It is owned by the cartels, run by the cartels, and now it’s played by the cartel members.  You can’t imagine how putrid the game is here.”

Football clubs participate in the drug trafficking business by becoming large-scale laundering outlets for many big cartels.  They often were used to cover up illegal deals and capital crimes.  For instance, kingpin Gonzalo Gacha publicly purchased a Bogotá club team eight years before his death; when he was assassinated, hundreds of illegal exchanges and documents were uncovered.

But in 1994, there was a chance for football to offer positivity to the Colombian reputation. The national team competing in that year’s World Cup had the potential for greatness—many predicted that the team would win the tournament. Sadly, the team fell well short of expectations, but the Colombian reaction to this failure did nothing but further their reputation for violence. Andrés Escobar, a defender held largely responsible for Colombia’s loss, was murdered in the week following Colombia’s exit.

His was not the only football-related homicide:  eight referees had been assassinated in 1988 alone.  These “tragic and demented” murders only served to reaffirm Colombia’s world reputation as a country ridden with violence, and elevate football to more than ‘just a game.’

So there we have it, a short look into how Football in South America has been used as a tool or even a weapon to shape life itself. Thanks for reading.