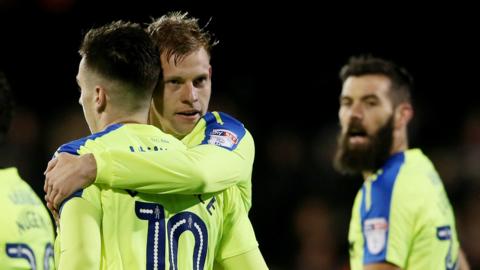 The points were shared at Craven Cottage as Fulham and Derby played out a 1-1 draw in front of the Sky Sports cameras.

Fulham, who went into the game without a win in their previous five matches, made the brighter start and almost took the lead when Floyd Ayite’s header was well saved by Scott Carson.

The visitors never really created any chances in the first half, but were almost given one when Tomas Kalas’ header back to ‘keeper David Button was short, very nearly playing David Nugent through on goal.

But it was the home side that looked livelier, and when Nugent was penalised for handball, Oliver Norwood stepped up and lashed the free kick home to give Slavisa Jokanovic’s men the lead. It was the Brighton loanee’s third goal in a Fulham shirt and was no more than they deserved after a dominant first half.

However the game wasn’t over there. Like in their last away game at Leeds, Derby quickly responded to going a goal down and just five minutes into the second half, Tom Lawrence ran at the Fulham defence before playing a beautifully waited pass to Matej Vydra who scored his seventh league goal of the season.

With the tie level, the game opened up and David Nugent squandered a great chance to put Gary Rowett’s men in front, failing to get a shot away after getting on the end of Tom Huddlestone’s long ball.

Derby held on despite a late Fulham onslaught to earn a point that keeps them just outside the play-off places, whilst Jokanovic’s side stay 17th with a point. Up next for Fulham is a trip to high flying Sheffield United on Tuesday night, as Derby welcome QPR to Pride Park.