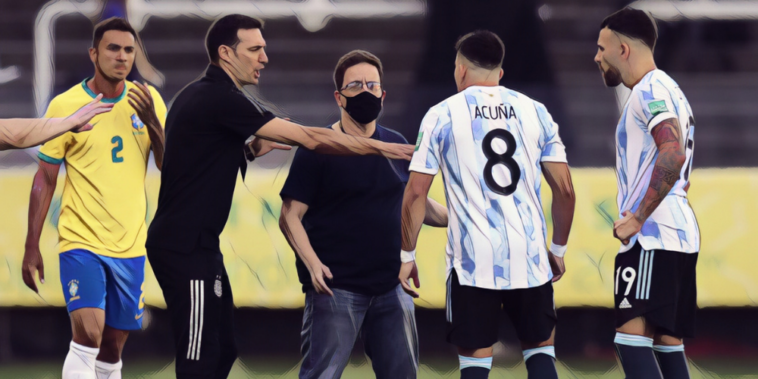 Four Premier League players are facing deportation after a World Cup qualifier between Brazil and Argentina was suspended amid Covid-19 rules.

Brazilian health officials entered the pitch shortly after kick-off and confronted the Argentina players, who have been accused of not following the country’s coronavirus rules upon entering Brazil.

The health officials sought to remove the four Premier League players – Tottenham’s Cristian Romero and Giovani Lo Celso and Aston Villa duo Emiliano Martinez and Emiliano Buendia – from the fixture, with visitors who have been in the UK 14 days before arrival in Brazil having to undergo a 14-day period of quarantine.

Martinez, Lo Celso and Romero were all named in the Argentina starting XI, though Buendia did not make the squad.

Sky Sports are reporting that each of the players now faces fines and deportation, with CONMEBOL, the South American football confederation, confirming the fixture had been called off by the referee following discussions with the two managers, Lionel Messi and the Brazil players.

Brazil’s health agency Anvisa had been informed that the four players had allegedly not stated that they had been in the UK within the past two weeks, though the Argentine Football Association insists the squad followed all protocols.

Martinez, Buendia, Lo Celso and Romero all face a 10 day period in a quarantine hotel upon their return to the UK, with each set to miss Premier League fixtures following the division’s return next weekend.