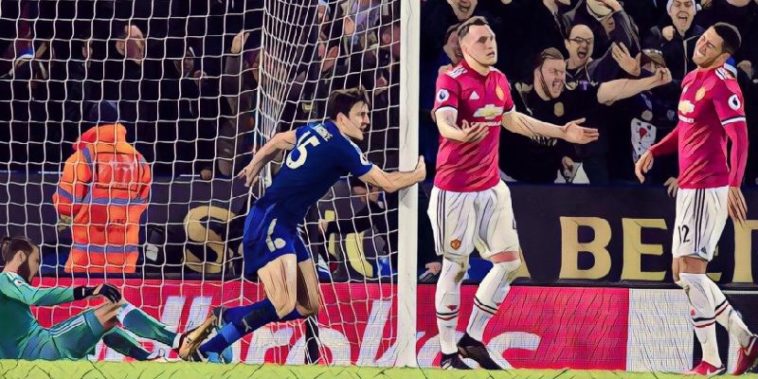 A calamity of errors for Leicester’s opener.

Leicester opened the scoring in typical Leicester style, a quick counter attack goal which saw Riyad Mahrez assist Jamie Vardy. We could be talking about any game from the 2015/16 season with that description, but we aren’t. It was a calamity of errors from United, with three players at fault.

The first player at fault was Phil Jones. United were in a good defensive shape, with Jones alongside his defensive partner Chris Smalling, both at least six yards away from Jamie Vardy. However, as the ball came towards the Leicester striker, Jones decided to go and engage the striker. As we’ve seen so many times, Vardy laid it off to the midfielder, this time Wilfred Ndidi, who lumped it forward to the on rushing Riyad Mahrez. If Jones would have maintained his position, he would have been able to complete his recovery much easier and maybe prevent Mahrez from getting the ball.

While I was watching the game live, I felt that the forward ball was hit  more in hope than expectation. I felt like it was still under control. I fully expected to see the green kit of David de Gea come racing out of his goal to clear the danger. However, that goalkeeper stayed at home. The ball dropped with a favourable bounce, allowing Mahrez to stop and hold the ball up, and it was at that moment that United’s next error was revealed.

Phil Jones and Victor Lindelof had assumed that the ball would be cleared, or run to de Gea, and had therefore not tracked the run of Jamie Vardy. Once the ball bounced, it was only then that they smelled the danger, and the rest is history.

Usually so calm, composed and clinical in front of goal, I would have put my house on Anthony Martial burying the chance that he had in the second half. Romelu Lukaku, who may I say had a wonderful game on Saturday, held off his man, burst forward, and played an eye of the needle ball through to the Frenchman.

All he had to do is do what he usually does so well, and keep the ball low, and bury it into the bottom right corner. However, inexplicably, United’s number 11 lost his composure and blazed the ball high over the bar and into the King Power crowd.

While it would be easy to criticise Jesse Lingard for missing an ‘open goal’, it was actually a more difficult chance than it looked. The England youngster was running away from goal at pace, and if he would have taken a touch, the chance would have gone. It was just unlucky.

However, for me there was an even bigger opportunity that could have sealed the win for United, and this fell to Marcus Rashford. As the 20-year-old burst into the box in acres of space, I felt that he should have taken the shot on first time, going across the keeper. However, he decided to do what his team mate Lingard had done before, and tried to round Kasper Schmeichel. While he almost won a penalty (but rightly didn’t in my opinion), he narrowed the angle to such an acute one that he would have found it difficult to score anyway. A poor decision.

After dominating the whole game, and having made all their changes, Chris Smalling suffered what looked like to be a groin strain. Jose Mourinho claimed that he sent a message via Ashley Young to his players about how to reorganise, however, it didn’t seem to get passed on.

With United having to play Victor Lindelof at right back, they had the personnel to have a reshuffle. Lindelof should have gone into the middle with Smalling just removed from the situation. Ultimately, it was Smalling who was left marking the hero of the match Harry Maguire at the back post – and the rest is history.