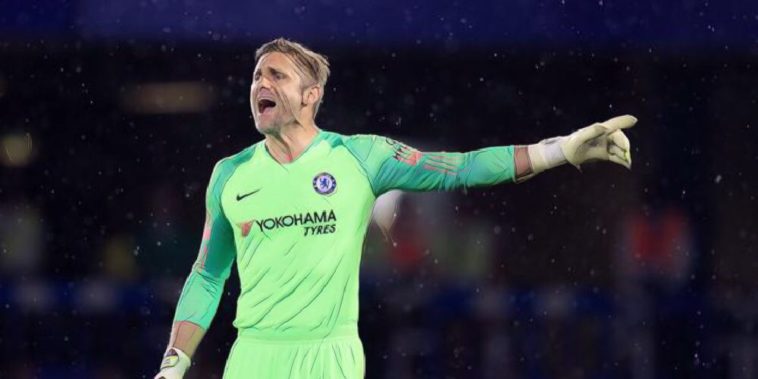 The England international called time on his career this summer, having spent last season in a back-up role at Stamford Bridge, with Green discussing how playing out from the back is now vital to a goalkeeper’s role.

Speaking with BBC Radio 5Live, the former Chelsea and West Ham ‘keeper was asked what had been the biggest change for goalkeepers over the course of his career, Green said: “The expectation of playing out from the back and how to do it.

“He (Kepa) puts the ball down, right foot, left foot, and will ping a perfect pass into the path of the full back whose making a run down the wing.

“You go wow, he could play in centre midfield.

“You go back to when someone like Barthez, with United years ago, well he actually plays out in training, Kepa could do that and hold his own no problem.

“Willy Caballero is also excellent at playing out from the back with his feet.

“That’s what the expectation is now, and that’s what you get brought up on in academy structures and that’s the way its gone forward.

“I remember not having the back-pass rule, that’s a) how old I am and b) how much it’s changed.

“They’ll say: I’ll get one in a thousand wrong or one a season wrong, but the way we’re playing, it’s a fundamental (part) of how we’re going to play and that one a season, yeah, we’ll take that on the chin.”

"Kepa could play as a centre-midfielder"

Former #CFC goalkeeper Rob Green talks about his time with the Blues and what it was like training with world class players.