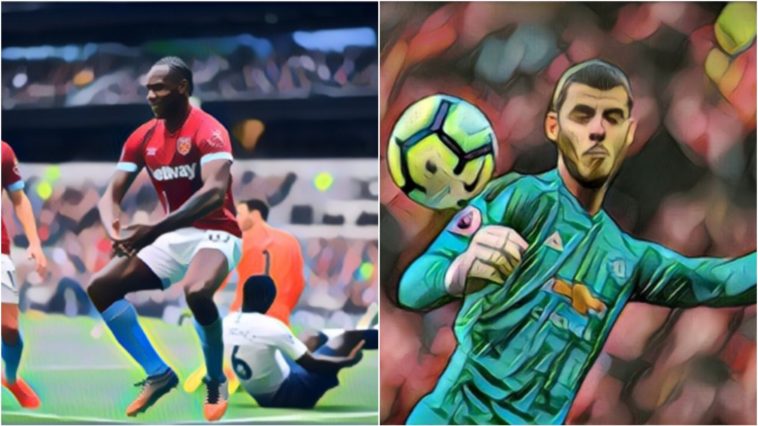 We are officially coming down the final strait of the Premier League season. Just three games remain, meaning some teams have nothing left to play for and strange results are popping up. Fulham not dropping a point since getting relegated, while Arsenal, Chelsea, Manchester United and Spurs are in a desperate race to finish sixth. Meanwhile at Anfield, dead pigeons are turning up on the pitch, such is the tension around the title race…

In the fourway battle to not qualify for the Champions League, Spurs laid down a real marker by losing 1-0 at home to West Ham United, a side with nothing to play for that had not won an away game since December.

It was the club’s first loss at the new Tottenham Hotspur Stadium since moving in earlier this month, and Michail Antonio‘s thunderbolt was the first goal Spurs had conceded in 427 minutes of action at the ground.

The Hammers player celebrated the goal in… unique fashion, shall we say. Following the game he said he was inspired by an Instagrammer known for crazy dance moves.

And the first ever celebration of an away team in Tottenham's new stadium is ……..😂 pic.twitter.com/UheufpwAL9

Honourable Mention: The subbing on of Alex Oxlade-Chamberlain was a nice moment that also deserves a mention, the Liverpool midfielder making his long-awaited return from injury during the Reds’ thrashing of Huddersfield.

Is there a better striker outside of the top six sides than Callum Wilson? The Bournemouth striker added two goals and an assist against Southampton at the weekend to bring his tally for the season to 14 goals and nine assists. It’s been a phenomenal season for the Englishman, who will cost a pretty penny if any team wants to prise him from the Cherries’ grasp.

Jamie Vardy would argue the point about Wilson being the best non-top six club striker, putting an exclamation point on that argument with two goals during Leicester City’s 3-0 win over Arsenal. He was a close challenger for this week’s award, but the Gunners’ defence is so frail that it seemed almost too easy for him.

The same could be said of Mo Salah, who put in a perfect performance on Friday evening, but it came against bottom-feeders Huddersfield Town, who will go down as one of the statistically worst teams in the Premier League era.

The Liverpool attacker did supply a classy one-touch finish for the Reds’ third goal at Anfield, lobbing Jonas Lossl following a lovely pass from Trent Alexander-Arnold.

Mo Salah now has 20 goals or more for the second season running, and has been one of the most decisive players in the league this season. His goals have won more points for his side than anyone else by far. The Egyptian’s absence from the PFA Team of the Year may look odd in the future when people look back on this season.

Few things encapsulate Leicester City more than Kasper Schmeichel‘s pass to Jamie Vardy for the third goal in their dismantling of a poor Arsenal team. The Dane hit a long ball right over the midfield and into the path of the ex-England international, who let the ball do all the work before attempting a lob over Bernd Leno.

The ball hit the crossbar, but Vardy took advantage of the rebound to finish off the north London outfit. Alexander-Arnold’s assist for Salah was gorgeous, but this was classic Leicester. If Brendan Rodgers can marry their style with his own philosophy, and with the amount of talent they have, they could make a stab at breaking up the top six cartel next season.

Few players have had such a drop off in performance from last season to this than David De Gea. In the one week he made two bad mistakes that cost Manchester United goals, the first of which was his botched attempt to save Leroy Sane’s shot with his legs. The second, more egregious mistake came in the crucial fixture against Chelsea, where he fumbled a long-range shot to allow Marcos Alonso to score an equaliser.

The Spaniard has been United’s rock for many a year, and his stellar performances last season were the main reason the club finished in second. A regression was always going to happen, but no one would have imagined to this extent. The sheer amount of shots the backline in front of him concedes was going to break the dam sooner or later, and it has in the last few months in a big way. With De Gea’s confidence seemingly shattered, mistakes are leading to more mistakes.

Ryan Bennett is a close runner-up with his shocker of a back pass to goalkeeper Rui Patricio, which eventually lead to Andre Gray’s equaliser for Watford. Fortunately for the centre-back, Wolves won 2-1 anyway.

Shane Long with miss of the season today. pic.twitter.com/hewJ1AQR6n

Shane Long has been on fire of late, scoring four goals in his last five appearances for Southampton. The Irishman even scored the opening goal in an entertaining bout against their local rivals Bournemouth, which eventually finished 3-3.

The Tipperary native did miss an absolute sitter with the score at 1-1, however. After his initial shot was saved by Artur Boric, Long had an open goal to shoot into, but instead hit the post from about four yards out.

… and two of those touches were penalty kicks.

The decline of the Red Devils in recent years has been a sort of sweet Schadenfreude for opposition fans who had to live under their thumb for many, many years as they crushed every team before them on their way to winning trophy after trophy. One imagines it must be particularly sweet for Man City supporters, whose club is now the preeminent side in the country.

It is heartening to see that rivalry soften this season though, as Man United fans are now cheering on their cross-town rivals in the tightest title race for some time. By all means, anyone but Liverpool, but actively cheering on your inherent enemy? Oh, how you have sunk.

Is that a dead bird? pic.twitter.com/EmiW1k1lqv