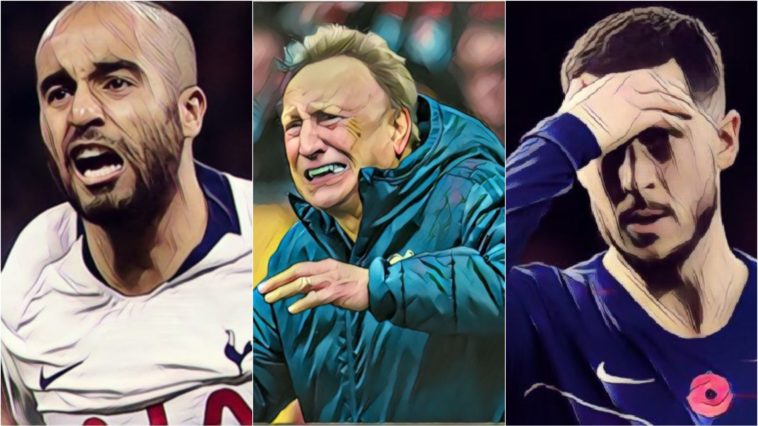 If you thought for a second that Shay Given cares more about world-class goals than his dinner, then you’d be dead wrong.

😂🙈 Salah rattles in a worldie but Shay Given only had eyes for his dinner #LIVCHE #LFC #YNWA pic.twitter.com/KS3fPLNhCM

This column is a sucker for hat-tricks, and we’ve scarcely seen a better one than Lucas Moura‘s on Saturday. The Spurs attacking midfielder scored three exceptional goals against Huddersfield to lift Tottenham back into third position in the Premier League.

With Harry Kane more or less ruled out for the rest of the season with an ankle injury, the north London side will need the likes of Moura, Son Heung-min and company to step up in the final few weeks of the season. The Brazilian certainly looks ready to do just that.

Honourable Mention: It almost felt like it wouldn’t be Raheem Sterling‘s day when he missed a sitter six yards from the goal, but he provided two goals in a tricky game for Manchester City in their title run-in, defeating Crystal Palace 3-1 at Selhurst Park. Nathan Redmond was also in great form in Southampton’s win over Wolves.

Moura could have taken first, second and third place in the standings this week, so good were his strikes, but Mo Salah shocked Chelsea suddenly like an RKO out of nowhere just eight minutes into the second half.

The Blues managed to hold off Liverpool until half-time on Sunday, but Sadio Mane broke the deadlock almost immediately after the break before the Egyptian doubled their lead soon after. It was arguably the Reds best performance of the season, and what a time to pull it out. Can they go all the way?

See Also: Five of the Best – Players to play for Liverpool and Chelsea

Kevin De Bruyne got his first(!) assist of the season with a delightful slide-rule pass to set up Sterling for their first goal against the Eagles.

This column didn’t see any fantabulous mistakes, so we’re settling for this miss by Eden Hazard in the second half at Anfield. For a man with the talent of the Belgian, that’s a howler.

How do I tell my grandchildren that Salah scored here and Hazard did not? pic.twitter.com/E56GfHNVGp

Dishonourable Mention: Here’s a video of that Raheem Sterling miss.

Read: Man City or Liverpool? Our writers predict how the Premier League title race will go

Moan of the Week

Cardiff City have had really bad luck with refereeing decisions of late. There was the botched offside call against Chelsea that allowed Cesar Azpilicueta to equalise, before eventually succumbing to a 2-1 defeat a few weeks ago.

On this occasion, the Bluebirds were given a penalty for a Ben Mee handball against Burnley at the weekend, only for the referee to reverse the decision. The ball hit Mee’s arm twice, but it was completely accidental, and the official saw it that way too.

This lead to our favourite type of rant, a Neil Warnock rant. “Can I say I’m lost for words?” the Yorkshireman asked after saying a lot of words about this incident.

It wasn’t as good as his Brexit or Chelsea rants, as he was clearly cognisant of getting a slap on the wrist from the authorities. “I don’t want any more charges this week, do I? I’ve already got three this week!” he said in the post-match press conference.

Warnock added that his players perhaps should have surrounded the referee like Burnley did, which is hardly inflammatory, but this column continues to find it laughable when Warnock finds ways to complain over a referee’s decision even when it’s the right one. We’ll miss some of his rants when Cardiff are inevitably returned to the Championship.

Shane Long‘s on fire, your defence is terrified.

Shane Long has scored three times as many Premier League goals as Alexis Sanchez this season.

Smithers, I’m beginning to think Ole Gunnar Solskjaer wasn’t the great tactician I thought he was.

Dishonourable Mention: Anthony Knockaert put in an atrocious and unnecessary tackle against Bournemouth on Saturday, earning himself a red card in the process. Brighton went on to lose the game 5-0. Donkey.

Didn’t expect to see this by the Old Trafford dugout. So. Many. Questions. pic.twitter.com/fIlbaxwaxu