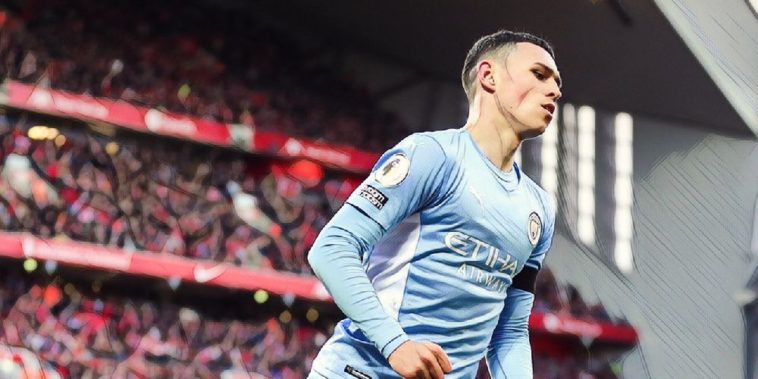 Two title rivals served up a second-half thriller, as Manchester City twice came from behind to earn a point in a breathtaking 2-2 draw with Liverpool on Sunday.

Pep Guardiola made two changes from the side that were undone by Paris Saint-Germain in midweek, with Gabriel Jesus and Phil Foden coming into starting XI at the expense of Riyad Mahrez and former Liverpool man Raheem Sterling.

That ensured it would be the same team that won at Stamford Bridge last weekend and, just as they did against Chelsea, City comfortably dominated the opening exchanges, with their fluid front line causing all sorts of problems for the hosts.

Amid that spell of pressure, Bernardo Silva produced a superb weaving run before teeing up Foden inside the box, yet the young Englishman could only fire his effort straight at Alisson, while Kevin De Bruyne squandered an excellent chance to header home at the back post.

Foden then thought he should’ve been awarded a penalty after a clumsy trip from Milner, although replays appeared to show that the foul took place outside the box, before the City starlet got in behind his man once again following a sensational pass from Ederson, only to be denied by a brilliant tackle from the onrushing Alisson.

Having struggled in the opening period, the home side noticeably improved after the interval with Diogo Jota seeing his early effort beaten away by the opposition ‘keeper, before that bright start was rewarded as Sadio Mane fired his side ahead after an excellent threaded pass from Mo Salah.

The visitors then hit back with Foden getting the goal that his performance deserved with a fine finish from the angle, before the typically lethal Salah continued his strong early-season goalscoring form to fire his side back ahead.

That lead would last just a matter of minutes, however, with Kevin De Bruyne’s strike deflecting in off an unfortunate Joel Matip to set up a dramatic and tense finale, with both sides seeking that much-coveted winner.

It looked as if that goal would come through Fabinho with less than five minutes to play, yet the Brazilian was denied by a stunning, sliding block from Rodri, with the two rivals forced to settle for a point after a hard-fought and thoroughly entertaining encounter.

An unbelievable block from Rodri. 🤯 pic.twitter.com/bH7pwzzsSw

Speaking after the match, City’s star man Foden insisted his side were ‘happy to get the draw’ against a tough opponent.

“It’s very difficult to come here with the fans,” he told Sky Sports. “It’s one of the most difficult grounds to come to and we dealt with it really well today.

“It had it all. It was end-to-end at times. It was such a brilliant game and we stuck in there to the end. We’re happy to get the draw and on another day we could have took the three points. It was disappointing not to go in at half time ahead but we kept the momentum when we came out in the second half and we dug in there.

The 21-year-old had seen appeals for a first-half penalty waved away following a coming together with James Milner, at a time when City were seemingly in complete control.

“I’m an honest guy,” he said of the incident. “I don’t like to go down when I get fouled. I like to stay on my feet and be honest. It happens and it’s football and we dealt with it well.”

He said the side’s ability to twice come from behind was a show of the sides ‘character’ at what is notoriously difficult ground to travel to.

“It shows our character,” he said. “We’ve not won here a lot but we carried on playing football when we went behind and didn’t look bothered and played really well today.”

The youngster capped his fine evening’s work with an excellent strike from the angle to make it 1-1, having previously scored when the two sides met on Merseyside last season.

“There wasn’t a lot of room to put it across goal so I put my laces through it and hoped for the est and was happy to see it go in the back of the net.”

Manchester City are not in action again until 16 October, when they host Burnley at the Etihad.