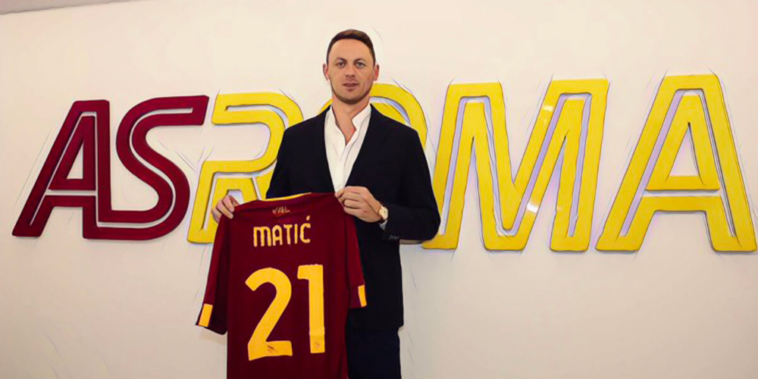 Jose Mourinho this week secured the signing of Nemanja Matic, bringing in a familiar face to Roma after the midfielder’s contract expired at Manchester United.

Mourinho has now worked with the Serbian midfielder at three different clubs, with the duo clearly valuing each other’s methods of work after another reunion in Rome.

Mourinho is not the first manager to have regularly recruited former favourites however, and we’ve decided to look back at five times coaches signed the same player on multiple occasions.

Fabio Capello’s best sides were often built on strong defensive foundations and in Christian Panucci he found a versatile and valued option for his backlines.

Capello first signed Panucci at AC Milan in 1993, with the promising defender breaking into a talented defence to help the Rossoneri to several major honours, including starting the club’s famous 4-0 thrashing of Barcelona in the 1994 Champions League final.

The Italian coach moved on to Real Madrid and soon brought his compatriot with him to Spain, where Panucci impressed as Los Blancos won La Liga under Capello’s management.

After short and less successful spells with Inter Milan, Monaco and Chelsea, Panucci joined Capello for a third time after signing for Roma in 2001.

Their union continued post-playing for Panucci, who later worked under Capello as assistant manager for the Russian national side.

Few player-manager partnerships have been as prolific as that of Neil Warnock and Paddy Kenny, with the former having signed the latter on no less than FIVE occasions.

Warnock first brought the goalkeeper in at Bury in 1998, before the most successful period of Kenny’s career came after he followed his former coach to Sheffield United. He spent eight years at Bramall Lane and helped the Blades to promotion to the Premier League.

Warnock’s faith in the former Ireland international continued as he signed Kenny for QPR, Leeds and Rotherham during a lengthy managerial career, though the shot-stopper admitted the duo did not always see eye-to-eye despite their continued alliance.

“Neil is a tough character. We used to go at it like cats and dogs until we were blue in the face,” Kenny said, as per the Daily Star.

“Of course he always came out on top because he was the gaffer, but I wasn’t one to back down.

“When I went to Leeds and he signed me for a fourth time, people asked: ‘Why does he keep on signing you?’

“Well he knows I could be a bit of trouble off the pitch but he also knew what he was going to get on the pitch.

“He helped me achieve what I achieved. When Neil first signed me I would never have imagined we would have gone all the way to the Premier League together.

“I needed a lot of work done and Neil was the guy who always got the best out of me. He saw I was a rough diamond.”

It’s fair to say that ‘Arry likes what he likes and when it comes to player recruitment that was often Niko Kranjcar and Peter Crouch.

The pair signed for Redknapp on multiple occasions during his managerial career, with the former Portsmouth and Tottenham manager clearly a fan of familiarity.

Kranjcar proved a bargain buy for Redknapp during a successful spell at Portsmouth, before the Croatian creator followed his former coach to both Tottenham and Queens Park Rangers.

“He recruited me for three English clubs and, looking at his greatest achievements as manager, I was there with him,” Kranjcar told Played Up Pompey Three.

“I cannot say Harry Redknapp was the best manager I had – you forget my dad was my manager for Croatia! I would have to say dad was the best because I still must have Christmas, New Year and birthdays with him!”

Crouch had been at both Portsmouth and Southampton when Redknapp arrived as manager, before being sold on.

Redknapp, however, re-signed the towering forward during his second spell at Portsmouth in 2008, before taking Crouch to Tottenham the following season.

Rafael Benitez has valued the attributes of Salomon Rondon during recent managerial spells, with the Spaniard signing the forward for three different clubs.

Rondon arrived at Newcastle during Benitez’s reign at St James’ Park and impressed during a season-long loan spell from West Brom, scoring 11 league goals to be named as the Magpies’ Player of the Season.

After deciding to leave the North East for the Far East, Benitez re-signed Rondon for Chinese Super League side Dalian Professional and he again proved a reliable lead of the line, netting 14 goals in 28 appearances across two seasons.

The duo reunited for a third time after Benitez signed Rondon on a free transfer for Everton last summer, though neither has enjoyed a fruitful time on Merseyside. Benitez was sacked mid-way through his first season in charge, with Rondon mustering just a solitary league goal in 20 appearances.

Nemanja Matic’s move to Roma means the midfielder has now signed for a Mourinho-managed team on three occasions, following previous transfers to Chelsea and Manchester United.

Matic was an integral member of Chelsea’s title-winning team under Mourinho in 2014/15, having been re-signed by the west Londoners from Benfica having been initially allowed to leave the club for Portugal three years earlier.

After a successful spell at Stamford Bridge he followed Mourinho to Manchester United, signing for the Red Devils in a £40m deal in 2017.

The Serbian spent five seasons with the club and made 189 appearances in all competitions, before leaving on a free transfer this summer to sign for Roma.

Jose Mourinho and Nemanja Matic are reunited once again at Roma 🇮🇹 pic.twitter.com/VT3DA35jwx

“I already worked with him, we have a good connection and he is one of the reasons why I came here,” Matic told Roma’s official website upon his unveiling.

“It’s not only easy to work with him, it can be hard! But he’s a winner and he’s exactly what I want from my coach and exactly what I like to do in my career is to win. He’s a winner, he transmits that energy to the players. I hope we can do big things together.”