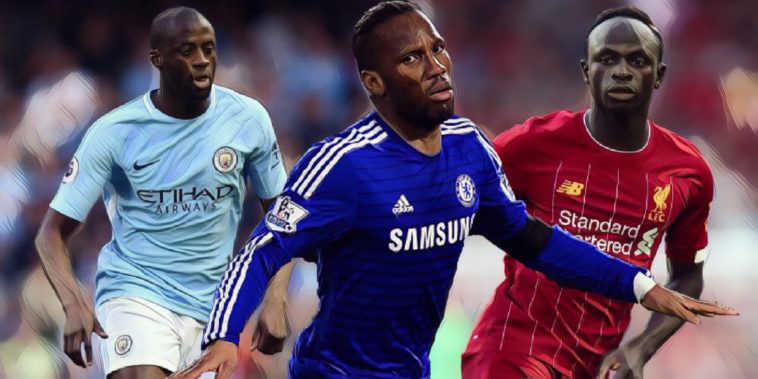 The Algerian has been a star performer in English football’s top flight during spells at both Leicester and Manchester City, but how does he compare to the other contingent of Africans to reach the 50 goal landmark?

We’ll start with the newest member of this club, Mahrez firing home at Turf Moor in midweek to register his 50th Premier League goal.

Mahrez would arrive at Leicester six years ago with the club still a Championship side, before embarking on the Foxes incredible journey from second tier side to surprise Premier League winners.

Perhaps no player played as crucial a role in that improbable title triumph, Mahrez being named as the PFA Player’s Player of the Year following a stand-out campaign.

He would remain at the King Power Stadium for a further two seasons until he joined Manchester City in a then club-record deal, helping the side to an unprecedented domestic treble in his first season at the Etihad, though he struggled to truly establish himself as an automatic starter.

The Manchester-born Nigerian international would join a Norwich side in the thick of a title race during the Premier League’s inaugural season, becoming the first player in Premier League history to score more than three goals in a game when he netted four in a 5-1 victory at Everton the following season.

Ekoku would score fairly regularly for the Canaries before joining Wimbledon, where he twice finished as the club’s top scorer in a side that struggled to score prolifically.

The forward would leave English football for Switzerland’s Grasshopper in 1999 before returning with spells at Sheffield Wednesday and Brentford, Ekoku having scored 52 Premier League goals throughout his career.

One of Africa’s great footballing exports, Kanu would make his name as part of the exciting, young Ajax side which conquered Europe in the mid-nineties, before an underwhelming spell at Inter Milan saw him signed by Arsene Wenger and Arsenal.

A technical forward, the Nigerian would help the Gunners to a domestic double in 2002, before playing a bit-part role in the club’s famed unbeaten season two years later in what would prove his final season in North London.

Twice named as African Footballer of the Year, Kanu would later enjoy spells with West Brom and Portsmouth, scoring the winning goal as the latter won the FA Cup in 2008 before retiring with 54 Premier League goals to his name.

The highest scoring Egyptian in Premier League history, Salah would endure a failed spell at Chelsea before reigniting his career in Italy, prompting Liverpool to bring the winger to Anfield two years ago.

Chelsea’s loss has certainly proved to be Liverpool’s gain, Salah embarking on one of the greatest individual seasons in Premier League history during that debut campaign on Merseyside, breaking a whole host of goalscoring records.

Salah’s 32-goal haul was the most ever recorded in a 38-game season, whilst no player had ever scored in more games in a single season (24) or against more teams (17).

Salah’s season would result in a host of individual accolades including a PFA Player’s Player of the Year and Football Writer’s Footballer of the Year double, alongside the Premier League’s Golden Boot, an award he would retain following another prolific season the following year.

A key part in Liverpool’s Champions League success and rise to English football’s elite, he is likely to rise up these rankings in the coming seasons.

Sitting level with Salah is Manchester City great Yaya Toure, who plundered 62 Premier League goals for the club during a glittering career at the Etihad.

Off-field incidents and agent influences should not distract from Toure’s contribution at City, the Ivorian one of the league’s greatest ever midfielders during his rampaging peak.

Having arrived from Barcelona with a reputation as a holding player, Toure would evolve into an unstoppable driving force, a box-to-box presence with a habit of scoring important and spectacular goals.

Few players have had as big an impact on the club’s rise to European football’s elite as Toure, whose individual season during their 2014 title triumph is amongst the finest the league has seen, and perhaps underrated.

One of the leading lights in the Premier League at present, Liverpool’s Senegalese forward has developed into a talismanic figure for the club, and seems on a continued upward curve towards being regarded as one of the world’s finest footballers.

Mane began his Premier League career at Southampton and thrived on the South Coast, breaking the division’s record for the quickest ever hat-trick by netting a treble against Aston Villa in a barely believable two minutes and 56 seconds.

His form prompted Liverpool to bring him to Anfield, where he has played a key role in establishing the club amongst European football’s leading teams, reaching back-to-back Champions League finals and winning the latter with victory over Tottenham last season.

Sitting in third place is former Nigerian international Yakubu, who was a reliable source of goals for several Premier League sides throughout his career.

Yakubu would arrive in English football with Portsmouth before enjoying spells at the likes of Middlesborough, Everton and Blackburn, twice scoring four goals in a Premier League fixture.

His bulky frame and predatory instincts were ideally suited to the English game, bulldozing defenders into submission and becoming a popular figure at each of his clubs.

His later years would be plagued by fitness issues, however, though he was a menacing presence at his best and remains the highest scoring Nigerian in Premier League history.

Feed the Yak and the Yak will score.

Perhaps the least popular player on this list, though there can be no denying that Adebayor was a formidable forward at his peak.

Plucked from Monaco by Arsene Wenger at Arsenal, the Togolese target man would take time to settle in England initially, before bursting into life following the departure of club great Thierry Henry to fire 24 Premier League goals in the 2007/08 season.

Those performances would see him named as African Footballer of the Year and make the PFA Team of the Year, whilst another strong campaign the following season saw him earn a big-money move to recently rich Manchester City.

A goal against his former club was celebrated in controversial yet iconic fashion, hurtling the length of the pitch to goad the travelling Arsenal support, whilst he clashed with several of his former teammates during the contest.

Despite scoring fairly regularly he fell down the pecking order and moved to Tottenham via a loan at Real Madrid, his latest middle-fingered salute to Arsenal’s fanbase.

He would enjoy a renaissance at Spurs and scored 35 Premier League goals over four seasons before an underwhelming spell at Crystal Palace.

Adebayor would leave the Premier League having scored 97 league goals, the forward currently enjoying the twilight of his career in Turkish football.

The only African centurion in Premier League history, Didier Drogba would establish himself as arguably the greatest player in Chelsea‘s history during two spells at the club, proving a talismanic figure for the West London side and winning a host of major silverware.

Signed by Jose Mourinho during the Portuguese’s first spell in charge at Stamford Bridge, Drogba would initially struggle to adapt to the physical demands of English football before using his hulking presence to its formidable potential.

A two-time winner of the Premier League’s Golden Boot, Drogba would win four Premier League titles and the Champions League amongst his long list of team accolades, though it was his tendency to rise to the biggest occasion that marked him out as true great.

The definition of a big game player, Drogba would score 10 goals in 10 finals throughout his career.