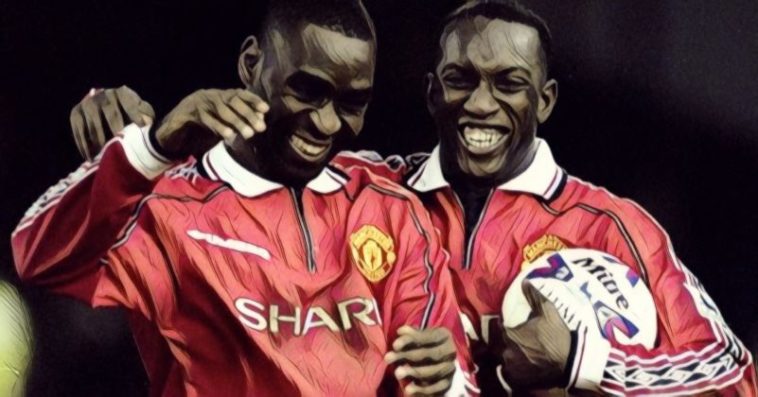 The latest instalment of our run through the Premier League archives takes us back to the final campaign of the nineties, a season which saw Manchester United make history by completing a famed treble under the guidance of Sir Alex Ferguson.

Elsewhere Blackburn were relegated to the second tier just four seasons after being crowned as champions of the Premier League, in what was the 100th season of top-flight football in England.

We’re continuing our look back at the greatest goalscorers of previous Premier League seasons, here are the five leading scorers from the 1998/99 campaign:

Cole had helped Manchester United to two league titles since his move from Newcastle during the mid-nineties, but would enjoy the best period of his career at the club following the acquisition of Dwight Yorke from Aston Villa.

Yorke arrived ahead of the 1998/99 season and the duo would swiftly form a devastating understanding to help fire Sir Alex Ferguson’s side to a wealth of major honours.

Cole scored 17 Premier League goals throughout the campaign – the best haul of his United career to date – including a double in an 8-1 thrashing of Nottingham Forest and the crucial winner against Tottenham as the title was secured on the final day of the season.

The forward finished the season with 24 goals in all competitions, a hugely influential figure in a historic treble-winning season at Old Trafford.

Arsene Wenger developed a reputation for discovering unheralded talents during his time at Arsenal, but Nicolas Anelka was perhaps his biggest bargain, the teenager arriving for a fee of £500,000 before establishing himself as a star in north London.

The forward had shown flashes of his potential with nine goals in all competitions as the Gunners completed a domestic double the previous season, but enjoyed a brilliant breakthrough campaign during the 1998/99 campaign.

The 19-year-old scored 17 league goals for the season including a run of four goals in four fixtures throughout October, his performances seeing the Frenchman named as the PFA Young Player of the Year and included in the divisional Team of the Year.

Hopes that Anelka would spearhead the Gunners into a new era of success were short lived, however, the forward signing for Real Madrid in a £22.3m deal at the end of the season.

Another teenager making a huge impression in the Premier League, Owen had won a share of the division’s Golden Boot during his first full season at Liverpool the previous year before starring at the summer’s World Cup with England.

Owen began the season with a winner against Southampton on the opening day of the season before scoring a clinical hat-trick in a thrashing of Newcastle at St James’ Park, one of two trebles the youngster would manage during the campaign after also notching a four-goal haul against Nottingham Forest.

The forward finished as Liverpool’s leading scorer for the second season in succession after netting 23 times in all competitions – 18 of which came in the Premier League to earn a share of the Golden Boot.

The England international became just the second player, after Alan Shearer, to retain the Golden Boot and he remains the only teenager in the division’s history to have won the accolade.

The 1998/99 campaign saw the early emergence of an exciting young Leeds side under the guidance of David O’Leary, the Irishman having taken charge in October following manager George Graham’s exit for Tottenham.

The Yorkshire side enjoyed their best ever season in the Premier League to secure a fourth-placed finish and UEFA Cup qualification, their hopes boosted by a prolific season from Netherlands international Hasselbaink.

The Dutchman had made an immediate impression during his first season at Elland Road before once again scoring prolifically in England’s top tier, scoring 18 goals to earn a share of the Premier League Golden Boot.

His haul included a brace in victory at Liverpool and a winning goal against Arsenal at Elland Road, that latter strike in the penultimate game of the season eventually costing the Gunners the league title.

The Premier League’s Golden Boot resulted in a three-way tie for the second season in succession, with Dwight Yorke finishing level with both Owen and Hasselbaink following a stunning first season at Manchester United.

Yorke’s goalscoring exploits at Aston Villa had persuaded Sir Alex Ferguson to make the forward the most expensive player in the club’s history, and he duly responded by firing the Red Devils to treble success.

The Trinidad and Tobago international scored 29 goals in all competitions – 18 of which were in the league – to also be named as the Premier League Player of the Season and in the division’s Team of the Year.

Yorke’s season included a run of eight goals in just five appearances following the turn of the New Year, the forward becoming the first foreign player, alongside Hasselbaink, to finish as the Premier League’s leading scorer.