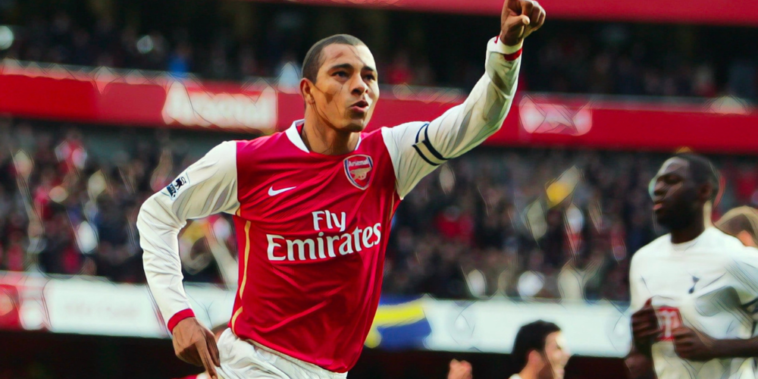 Arsenal are closing in on a deal to sign Gabriel Jesus from Manchester City, with Mikel Arteta have made the forward his leading forward target of the summer window.

Jesus has struggled for regular minutes at the Etihad despite an impressive goal record in English football, one which he will hope to continue as the spearhead of Arteta’s side in north London.

The 25-year-old will hope regular football can lead to his inclusion in Brazil’s World Cup side and he looks set to become the latest Brazilian to sign for the Gunners.

Ahead of this deal, we’ve looked back at five of the best Brazilians to play for Arsenal.

Sylvinho became the first ever Brazilian to represent Arsenal after signing for the north Londoners from Corinthians in 1999.

Arriving as competition and an eventual replacement for the long-serving Nigel Winterburn at left-back, he soon displaced the veteran to become a fixture in Arsene Wenger’s side.

He shone during his debut campaign in the Premier League as the Gunners finished as runners-up and reached the UEFA Cup final, making 46 appearances in all competitions to be included in the PFA Team of the Year.

The emergence of Ashley Cole saw him fall out of favour during his second season in England, though spectacular goals against the likes of Sheffield Wednesday and Chelsea endeared him to the Arsenal support.

He departed for Spain to sign for Celta Vigo in 2001, before enjoying success at Barcelona. He won three league titles and two Champions League trophies with the Catalans, though was an unused substitute as Barca beat Arsenal in the 2006 UCL final.

Edu followed in the footsteps of Sylvinho in swapping Corinthians for Arsenal, signing in a £6m deal after an initial move had been delayed due to passport issues.

The midfielder took time to settle in the Premier League but soon became a valued member of Arsene Wenger’s squad, winning a domestic double with the Gunners in 2001/02.

From a technical midfielder…

To our technical director 👔

Injuries and competition for places restricted his opportunities for much of his time in the capital, with 51 of his 127 appearances coming from the bench.

He did, however, feature prominently during the famous ‘Invincibles’ campaign in 2003/04, making 48 appearances in all competitions and scoring seven goals.

Having departed to sign for Valencia in 2005, he returned to Arsenal as the club’s first ever technical director in 2019 and continues to work alongside Mikel Arteta in rebuilding the side.

Gilberto Silva’s role in Brazil’s 2002 World Cup success brought the combative midfielder to the attention of Arsenal, with Arsene Wenger securing a deal to sign the South American enforcer.

Gilberto capitalised on an injury to national team captain Emerson to play every minute of Brazil’s victorious campaign in Japan and South Korea, before arriving in the Premier League in a £4.5m deal.

You've sent us your favourite Gilberto memories – now here are some of ours ⬇️ pic.twitter.com/RC8vTrFS2v

That fee proved a bargain for Arsenal as the midfielder became a key cog in Wenger’s side, his defensive assurance allowing Patrick Vieira to flourish further forward in a formidable midfield axis.

He was a crucial component of the 2003/04 title-winning team, as the Gunners completed an entire Premier League campaign without defeat to make history.

He made 244 appearances across six seasons in north London and called time on his international career having won 93 caps for the Selecao.

Arsenal unearthed a gem in Gabriel Martinelli, having signed the teenager in a £6m deal from Ituano in July 2019.

The forward made an instant impact during an impressive first season in English football, scoring ten goals across all competitions for the Gunners.

Fitness problems disrupted his progress during the 2020/21 campaign, but he returned to feature regularly under Mikel Arteta last season with his relentless running and indefatigable work-rate making Martinelli a firm fans’ favourite.

Still just 21-years-old, he is among an exciting collection of promising attacking talent at the Emirates and was handed his senior debut for Brazil in March 2022. Martinelli previously formed part of the side that won an Olympic gold medal at Tokyo 2020.

Gabriel made an instant impression with a goal on debut at Fulham and quickly established his place in Mikel Arteta’s plans, impressing with his aerial presence and composure in playing the ball out from the back.

A left-footed defender who brings balance to the backline, he was a mainstay of the Arsenal side during a strong second season at the Emirates in 2021/22, making 35 appearances and scoring five goals.

Alongside Ben White at centre-back, he helped the Gunners to a fifth-place finish as Arteta’s side narrowly missed out on Champions League football.