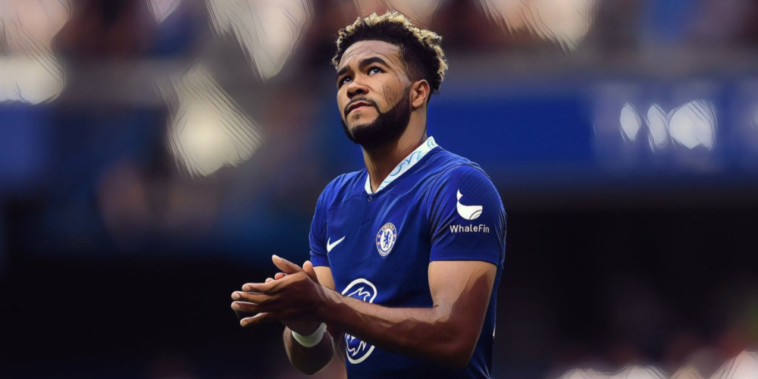 The first-ever winter World Cup has provided quite the distraction from the domestic season, with recent weeks having seen fans glued to the action in Qatar.

The unprecedented scheduling of the tournament mid-season has added an intriguing narrative to the Premier League campaign, one which will resume after a brief hiatus with the traditional Boxing Day schedule.

While several stars have faced gruelling fixture congestion as a result, the pause in the season has benefitted others who have been working behind the scenes to return to full fitness.

Here are five injured players who will have benefitted from the World Cup break.

Reece James missed out on a place in England’s World Cup squad after suffering a knee injury during Chelsea’s Champions League clash with AC Milan in October.

The right-back had initially had faint hopes of returning for the tournament, but a decision was made to leave the Chelsea star at home to continue his recovery. It was cruel luck for James who was expected to feature prominently for the Three Lions in Qatar, but the enforced break in the season has at least allowed the defender to get up to speed for his club side.

it’s been a while but back like we never left! 💯 pic.twitter.com/8v2IjJ0DIW

James played 60 minutes in a recent behind-closed-doors friendly with Brentford and is expected to be available as Chelsea restart their Premier League season against Bournemouth on December 27. His return will be a major boost to Graham Potter, whose side entered the break on a run of three consecutive league losses.

Creating chances has been an issue for Chelsea, who rank 18th for xG (expected goals) since Potter’s arrival as manager and have slumped to eighth in the Premier League table as a result. James was directly involved in 14 league goals last season and has four goal contributions from ten starts in all competitions this time around.

His ability to fashion chances could be crucial to Chelsea as the club look to address their stuttering form over the festive period.

Arsenal have been without the services of Emile Smith Rowe since September, with the 22-year-old having struggled with an ongoing groin issue that required surgery.

He has featured for just 48 minutes so far this season, but Mikel Arteta has revealed that the midfielder is closing in on return – though the Boxing Day fixture with West Ham will come too soon.

“Emile is close. He had a setback but he’s there and he’s in a good place,” Arteta said this week.

"His attitudes been great"

"He's got all our support, he's a huge talent"

Arteta says he needs Emile Smith Rowe at his best because his contribution is 'key to the team' ❤️️ pic.twitter.com/XQWQuNjKTn

“His attitude has been great and this is part of any career, any development, to have periods where you are out and have long-term injuries. He needs to react to that but for sure he has got all of our support and he is a huge talent that we need for the second part of the season at his best because his contribution will be key to the team.”

Smith Rowe shone during a breakthrough season with the Gunners last term and was nominated for the 2021/22 PFA Young Player of the Year award, eventually won by Manchester City’s Phil Foden.

Only Bukayo Saka scored more than his ten league goals and Smith Rowe’s invention and goal threat will be welcomed in the coming weeks, as Arsenal look to compensate for the loss of Gabriel Jesus.

It’s been a stop-start season for Anthony Martial at Manchester United, with Erik ten Hag having discussed his frustration at the forward’s lack of availability.

When fit, Martial has produced and has averaged a goal every 91 minutes across his eight appearances in all competitions this season.

Hamstring, Achilles and back problems have derailed his campaign to date, but the break for the World Cup has allowed Martial to work on his fitness ahead of the Premier League’s return. He started recent friendly clashes with Cadiz and Real Betis as United embarked on a mini-break to Spain, before featuring for 72 minutes as the Red Devils beat Burnley to progress in the Carabao Cup in midweek.

His return to fitness is a huge positive for Ten Hag, as United look to kick on and climb into the top four. Cristiano Ronaldo’s high-profile exit has left the club short of depth at centre-forward and Ten Hag looks set to place his trust in Martial over the remainder of the campaign.

The Frenchman has mixed fine periods with inconsistent spells during his career at Old Trafford, but now has the chance to claim a prominent role in the new manager’s plans.

Liverpool’s midfield has been a talking point throughout the campaign, with the Reds having lacked their usual energy in the centre of the pitch. Ageing legs and a lack of options offered some reason, but Jurgen Klopp now has alternatives in his engine room with Curtis Jones, Alex Oxlade-Chamberlain and Naby Keita all returning.

It can be argued that each face a fight to salvage their Liverpool career, with Oxlade-Chamberlain and Keita out of contract at the end of the season. The former is expected to move on after falling out of favour, though the latter’s situation is less clear.

"It's a tricky one with Keita. Last summer Liverpool were in talks to extend his contract but unsurprisingly given his lack of action since it's all gone very quiet on that front." #lfc [james pearce – the athletic] pic.twitter.com/FKRur48MF5

Klopp has long held faith in the Guinea international, but injuries have been a recurring theme across his five seasons at Anfield. Last season he appeared to turn a corner after 40 appearances in all competitions, with stand-out performances against Manchester United and Benfica a reminder of his capabilities.

This season, however, has failed to get going. He made his first competitive appearance of the campaign against Manchester City in midweek due to hamstring and muscular issues. A free agent in just six months time, his future will hinge on whether he can stay fit across the second half of the campaign. If he can, Liverpool might just find the midfield dynamism that has been lacking this season.

Isak excited upon his arrival from Real Sociedad, marking his debut with a wonderful goal at Liverpool and scoring twice in three appearances.

The Sweden international recently returned to training and while the festive programme will come too soon for Isak, Eddie Howe outlined his hope that the 23-year-old can play a big part in January.

"He's doing well. We're pleased with him. Is he going to make the next couple of Premier League games? Probably not. He's going in the right direction and we hope in the busy January period he can play a big part in that." pic.twitter.com/VgE79Qc42e

“He’s doing well and we’re pleased with him, but he probably won’t make the next couple of Premier League games,” Howe said ahead of Newcastle’s Boxing Day trip to Leicester. “We’re hoping he can play a big part in a busy January.”

Isak’s return can boost Newcastle’s unexpected push for Champions League football, with the Magpies third in the table as the Premier League season restarts. The £63m arrival has not yet played alongside Callum Wilson for the club and Newcastle fans will be salivating at the prospect of their forwards working in unison.