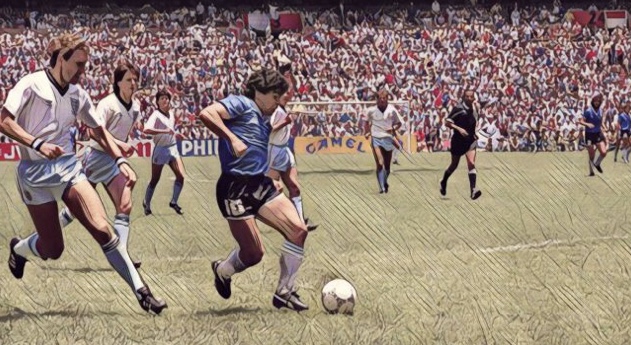 This summer’s World Cup in Russia has already provided some beautiful goals, so we thought it would be the perfect time to check out the five greatest goals ever scored at football’s most prestigious tournament.

A goal that displayed the sublime touch that Dennis Bergkamp was renowned for. Holland met an Argentina side, fresh from knocking out England, in the quarter-finals of France 98. Extra-time loomed as Patrick Kluivert’s opener was cancelled out by Claudio Lopez, but Bergkamp had other ideas.

Inside the last minute and inside his own half, Frank De Boer floated a 60 yard diagonal ball in Berkgamp’s direction. His first touch was superb as he brought the ball down, his second took him past Roberto Ayala and his third lashed the ball into the far top corner with the outside of his boot. It was a wonderful piece of skill from a wonderful player.

TO CHECK OUT FIVE OF BERGKAMP’S GREATEST GOALS CLICK HERE!

The 2014 World Cup was when James Rodriguez truly announced himself on the world stage. Part of an entertaining Colombia side, they met South American rivals Uruguay in the last 16 of the tournament. With the game goalless, the ball was pinging around outside the area when it fell to Rodriguez. Cushioning the ball on his chest, the play-maker swiveled and hit an unstoppable left footed volley that crashed into the goal off the crossbar.

He would add a second as his side progressed to the quarter-finals on route to winning the tournament’s golden boot. His stunning opener would later win the 2014 Puskas award for goal of the year.

A 17-year old Pele had made a stunning impact at the 1958 World Cup in Sweden as Brazil lifted the first title in their decorated history in the competition. The South American’s took on the hosts in the final and fell behind to an early goal before Vava’s double put them ahead. Their third goal, scored by their teenage sensation was a thing of beauty.

Controlling a cross field pass, under pressure, on his chest inside the area, Pele proceeded to flick the ball over the head of the last defender before volleying past the goalkeeper. On the biggest stage of all, it was a sensational goal from a remarkable player. Pele would later add a second as Brazil ran out 5-2 winners.

TO CHECK OUT 10 OF THE BEST PELE QUOTES CLICK HERE !

Often regarded as the greatest team goal of all-time, by arguably the greatest international side in history. Brazil met Italy in the 1970 final, looking to win the trophy for the third time in four tournaments. They dominated their opponents from the start, and had a commanding 3-1 lead before a move full of Brazilian flair sealed victory.

Brazil swapped passes before Clodoaldo took the ball past four players inside his own half and released to a team mate. The ball eventually reached Jairzinho who cut inside and found Pele. Pele held the ball up and waited before laying the ball to his onrushing captain who fired the ball into the far corner without breaking stride. It was a beautiful team goal that defined Brazilian football, just two outfield players were not involved in the move.

A game in which Diego Maradona scored arguably the World Cup’s greatest and most controversial goals. Four minutes after his ‘Hand of God’, Maradona scored one of the best individual goals in history.

Picking up the ball in his own half, the diminutive Argentine’s quick feet beat Peter Reid and Peter Beardsley. A burst of acceleration carried him into the England half where he ghosted past Terry Butcher. Approaching Terry Fenwick on the edge of the area, Maradona beat a fourth England shirt before rounding goalkeeper Peter Shilton and passing the ball into the empty net. It was a moment of individual brilliance to break English hearts as Argentina and Maradona went on to lift the trophy.

TO CHECK OUT THE SOME OF THE BEST MARADONA QUOTES CLICK HERE!