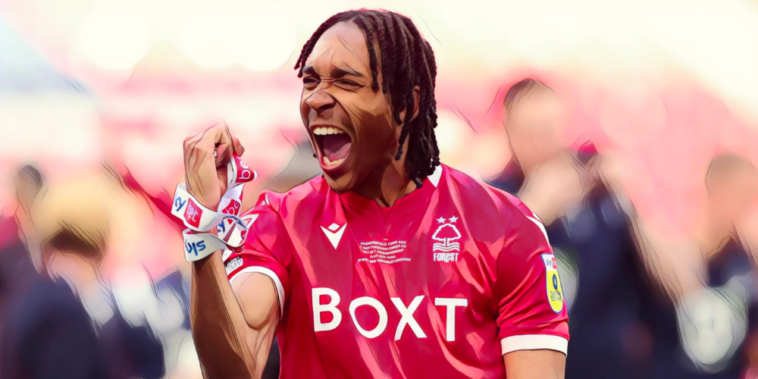 We’ve decided to look at some of the notable names grabbing the headlines right now, looking at five full-backs who are in high demand this summer.

Djed Spence enjoyed a rapid rise to prominence last season with the right-back having shone during a season-long loan spell at Nottingham Forest.

Middlesbrough were no doubt left to regret their decision to allow the 21-year-old to move to their divisional rivals, with Spence being named in the Championship Team of the Season after a brilliant season for Forest.

Spence made 42 league appearances for Forest and his performances have attracted interest from the Premier League, with Tottenham understood to have opened talks over a deal for the London-born defender as Antonio Conte looks to improve his options at wing-back.

Season officially Over & Qualifications for the euros✅ Time to rest & recover. See you all next season📈 pic.twitter.com/yACVA49D6p

Manchester United and Arsenal have also been linked, whilst Forest are keen to bring Spence back to the City Ground on a permanent basis.

Steve Cooper’s side may need to move on to alternative targets however, as bigger clubs circle for the full-back who is valued in the region of £20m at the Riverside.

Marc Cucurella emerged as one of the Premier League’s signings of the season in 2021/22, with the left-back enjoying a superb season at Brighton.

A debut season like no other. 🔥 Our Men's Player of the Season is @Cucurella3! 🌟

The 23-year-old’s performances have alerted the attention of several Premier League rivals and both Manchester City and Chelsea have been credited with an interest as the duo look for reinforcements at left-back.

City are in the market for a natural left-footer to provide competition in the role, whilst Chelsea require competition and cover for Ben Chilwell with Marcos Alonso keen to quit the club for Barcelona.

Cucurella will not come cheap however, after a stand-out season on the South Coast.

Neco Williams has found a Trent Alexander-Arnold-sized obstacle in his path to first-team football at Liverpool, with the presence of the Reds right-back restricting his opportunities at Anfield.

The Wales international moved on loan to Fulham during the January transfer window and impressed as the west Londoners sealed the Championship title, with Marco Silva’s side understood to be keen on signing Williams on a permanent basis following their Premier League return.

Fulham face a fight to secure the 21-year-old’s signing however, with fellow newly-promoted side Nottingham Forest also interested as the club seek a replacement for departed loanee Djed Spece.

Liverpool are believed to value Williams in the region of £15m and are open to his departure, as the Reds pursue a deal for Aberdeen teenager Calvin Ramsay as a potential replacement.

Williams – who has already won 21 caps at international level and can operate in both full-back positions – will want to secure regular top-level football to boost his preparations for Wales’ World Cup campaign in Qatar.

Denzel Dumfries has emerged as a rumoured transfer target for Manchester United as Erik ten Hag prepares his overhaul of the squad at Old Trafford.

Aaron Wan-Bissaka and Diogo Dalot both received criticism at right-back last season and Dumfries has been named as a potential replacement.

Former Inter Milan forward Christian Vieri last week claimed his former side are willing to cash in on Dumfries and Milan Skriniar in a bid to balance the books this summer, with reports having suggested a fee in the region of £26m could be enough to secure a deal.

Denzel Dumfries has scored in consecutive games for the Netherlands for the second time in the last year.

Dumfries signed for Inter from PSV Eindhoven for a fee of €15m last summer, having starred for the Netherlands during last summer’s delayed European Championship.

The 26-year-old provided five goals and four assists in just 21 league starts for Inter last season and could provide Manchester United with the attacking impetus that has been lacking from full-back.

Calvin Bassey is on the radar of Premier League clubs after an impressive season at Rangers, with the left-back one of the Scottish side’s star performers during their run to the Europa League final.

Bassey has flourished since leaving Leicester’s academy system to sign for Rangers in 2020, enjoying a breakthrough campaign in 2021/22 to make 50 appearances in all competitions and earn inclusion in the Europa League Team of the Season.

Aston Villa manager Steven Gerrard is allegedly interested in raiding his former side to sign Bassey, who has earned five caps for Nigeria since breaking into the Super Eagles side.

Bassey also caused a stir after he posted an Instagram story promoting a luxury chauffeur service with his location as the Wolves training ground last week, only for the post to be swiftly deleted.

Rangers are believed to value the left-back – who has also shown versatility in operating centrally – in the region of £25m.