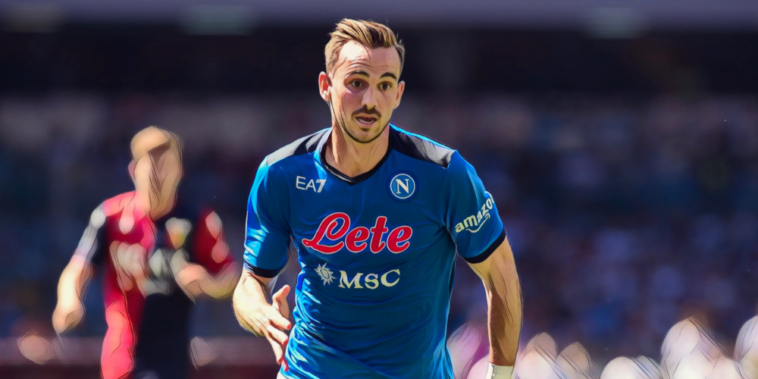 Manchester United remain interested in a deal to sign Frenkie de Jong from Barcelona this summer, though the club’s pursuit of the midfielder has turned into one of the window’s biggest sagas.

United were reported to have agreed a fee with Barcelona earlier in the window, but complications – including unpaid wages to De Jong and an apparent reluctance from the 25-year-old to leave – have seen a deal stall.

Midfield has been the focus for Erik ten Hag this summer and while Christian Eriksen has arrived on a free transfer, additions in a more defensive role remain required with just a week until the Premier League season begins.

De Jong’s unique skillset and familiarity with Ten Hag’s methods make him the number one target, but we’ve decided to look at five midfielders who could be attainable alternatives and an upgrade to the Red Devils’ engine room.

Fabian Ruiz could offer a fine alternative to De Jong and with less than 12 months remaining on his current contract at Napoli, could be available for a reduced fee.

The 26-year-old has shone across four seasons at Napoli, where his performances have seen him break into a Spanish national side boasting midfield depth, earning 15 caps since his debut in 2019.

Ruiz scored seven goals and provided three assists in 33 league appearances in 2021/22, operating primarily in a deep-lying role in front of the defence. The Spaniard, however, is also comfortable as an orthodox central midfielder and in a more advanced position.

In terms of numbers, Ruiz looks a solid alternative to De Jong. The midfielder lacks the level of press-resistant dribbling that De Jong can provide (0.5 take-ons completed per 90, in comparison to De Jongs’ 1.9), but a pass accuracy of 90.47% compares well to the Dutchman (91.33%).

When considered that Ruiz averages significantly more passes (81.7 to 59.4) and forward passes (20.7 to 13.8) per 90 and the numbers are even more impressive. Ruiz also bettered De Jong for tackles per 90 minutes (2.1 to 1.3) last season and should be a name on the Red Devils’ radar.

Youri Tielemans is another name who has less than a year remaining on his current deal and the midfielder has expressed a desire to leave Leicester this summer.

Arsenal are understood to be interested in a deal to sign Tielemans and it has surprised some that United – and other clubs – have not rivalled that interest.

Tielemans has been a key figure for the Foxes in recent campaigns, helping Brendan Rodgers’ side to consecutive fifth-placed finishes and FA Cup success in 2021, in which he scored a stunning winner in the final win over Chelsea.

Youri Tielemans fired @LCFC to their first-ever #EmiratesFACup trophy with a stunner from range! pic.twitter.com/Wcm4WdhyW9

Technically gifted and able to operate in a number of roles, Tielemans has performed as both a box-to-box midfielder and deep-lying conductor across his three-and-a-half seasons with Leicester.

Given his contract situation, Premier League experience, and international pedigree (52 caps for Belgium), he would represent an improvement on United’s much-maligned midfield.

Neves has been named as a potential alternative if a deal for De Jong fails to materialise, with Fabrizio Romano having confirmed the club’s admiration for the Wolves midfielder.

“He’s (ten Hag) waiting. He’s waiting for Frenkie, he’s going to wait for Frenkie, so Frenkie is plan A, B and C. I’m sure that if Frenkie says ‘no way’, then maybe they can go for an alternative,” Romano told the United Stand.

“There are players who are appreciated by United since a long time like Youri Tielemans, but he’s still in Arsenal’s list, so he’ s not going to be an easy one. Ruben Neves, but the price is very high, so another not easy one, but for sure Man United will be ready with alternatives. As of now they want Frenkie.”

Ruben Neves does not score tap-ins… 😵

Neves has spent the past five seasons with Wolves, helping the side rise from the Championship to a place in the Premier League and regular competitors for the European places.

However, the 25-year-old – who excels in both short and long range passing – has expressed a desire for a new challenge and Champions League football.

Far from a like-for-like alternative but an option that could be considered, Konrad Laimer has spent the summer being linked with a move to Bayern Munich.

The RB Leipzig midfielder has entered the final season of his deal with the Bundesliga side, a scenario which makes him a viable option for clubs looking to inject energy and defensive discipline into their midfield.

Laimer averaged 5 ground duels won per 90 minutes in the Bundesliga last season and his ability to operate at the base of the midfield and break up attacks could prove invaluable to Ten Hag’s plans.

What a strike 🚀 Konrad Laimer giving the keeper absolutely no chance with this thunderbolt ⚡️ #Bundesliga pic.twitter.com/7Eve9f7Nt4

Sergej Milinkovic-Savic is no stranger to the gossip columns and transfer talk pages, with the Lazio midfielder having been routinely linked with a move to one of Europe’s leading clubs.

Lazio’s failure to secure Champions League qualification could see the capital club cash in and reports this week have linked the Red Devils with an opening offer of around £42m.

The Serbia international is among the most complete midfielders in European football right now, comfortable operating in almost any role.

Last season the 27-year-old scored 12 goals and provided 12 assists from a central position, though he has also featured in an anchor role and as an advanced midfielder behind the forwards.

🎩 Sergej Milinkovic-Savic was one of only two central midfielders in Europe's top 5 leagues last season, along with Lucas Paqueta, to average >1 per game for tackles, key passes, shots, aerials won and dribbles. A midfielder that does a bit of everything pic.twitter.com/g2mILd2wPx

His wide-ranging attributes perhaps replicate what United had hoped Paul Pogba would bring to the club and Milinkovic-Savic could prove the perfect replacement for the departed Frenchman.

Boasting the physical and technical qualities to thrive in the Premier League, this could be the summer that the Serbian leaves Lazio in a big-money move.