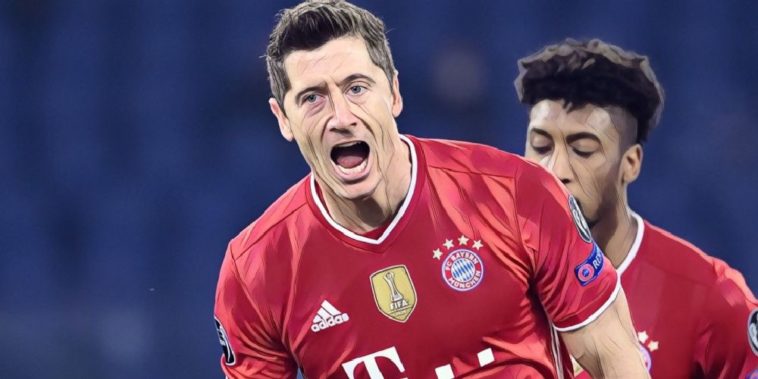 Robert Lewandowski continues to dominate on the Champions League stage and was once again brilliant in Bayern Munich’s emphatic 4-1 win at Lazio this week, the holders sending an ominous warning to the rest of the competition as they began their knockout stage campaign.

The 31-year-old finished as the leading scorer in last season’s competition as Bayern were crowned as champions and has enjoyed another superb season so far.

But how does the Poland international rank amongst the Champions League’s greatest ever goalscorers? Here are the top five players who found their shooting boots in Europe’s most elite competition…

Karim Benzema ranks fifth amongst the Champions League’s all-time leading scorers and remains a key figure in the Real Madrid side more than a decade after arriving at the Bernabeu from Lyon.

Having played a huge 125 times in the competition, he has scored 69 times, averaging 0.55 goals per game, winning the competition on four occasions during a glittering career in the Spanish capital.

The 33-year-old has scored in a joint-record 16 consecutive Champions League seasons and has starred in this season’s competition, netting four times in five group stage fixtures.

Record holder for a long time, Spanish legend Raúl. Until 2014, this man was safely top of the goalscoring charts in the Champions League with his 71 goals in the competition. He was also the first-ever player to score 50 Champions League goals – that’s something Messi and Ronaldo can never take away from him.

Messi came along and broke the record that Raúl set with 66 goals in his iconic Real Madrid days and five in his latter days with Schalke. He was the all-time top scorer for a long time, but his record turned out to be no match for the goalscoring prowess of some modern greats.

Lewandowski moved one ahead of Raúl with the opening goal in Bayern’s convincing win at Lazio this week, the defending champions the favourites to retain the Champions League this season.

Bayern’s historic run to treble success last season was spearheaded by a career-best season by their prolific Poland international, Lewandowski scoring 55 goals in all competitions including an astonishing 15 goals in just 10 appearances in the Champions League.

The 32-year-old is arguably world’s finest footballer right now and continues to amass goals at an incredible rate, the brilliant Bayern forward set to add further to a phenomenal record of 72 goals in just 95 appearances amongst Europe’s elite.

It was always going to be Messi and Ronaldo occupying these two spots, and it’s the Argentine who takes second with 119 goals in 148 games. This does give him the best goals-to-game ratio of the top 5 with 0.8, but that doesn’t help him cover the large gap in goals between himself and Cristiano.

At least second place is safe, as it would be quite the surge in form to see Lewandowski bridge a 47-goal gap, with Messi having to retire immediately and… never mind. The Messi-Ronaldo debate will continue, but there’s one thing no one can question, and that’s who is the top Champions League goalscorer.

Cristiano takes top spot with a staggering 134 goals in 175 games, 0.77 goals per game. We all know how good the Portuguese man is, but he’s not just the all-time top scorer. Just have a look at the records he holds.

Ronaldo is showing few signs of slowing up his domination at the top level of European football and has scored 25 goals in 28 appearances across all competitions for Juventus so far this season.

Four of those have come in just five Champions League fixtures and the Bianconeri will now hope Ronaldo can inspire them to victory over Porto in the last-16 after the Italian champions lost the first leg in Portugal.