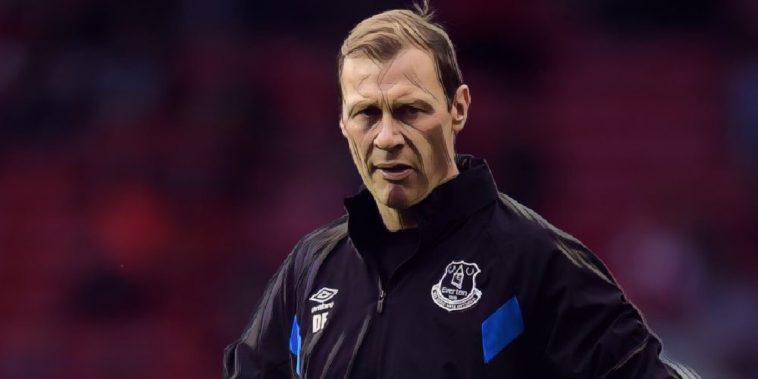 Duncan Ferguson brought his brief spell as Everton interim manager to a close with a 0-0 draw with Arsenal, the club legend admitting he ‘can’t wait’ to work under Carlo Ancelotti.

An hour before today’s lunchtime kick-off, Everton announced the news that they had appointed the highly-decorated Carlo Ancelotti as the clubs next manager, the Italian moving to Merseyside having won league titles in four different countries as well as lifting the Champions League three times.

The 60-year-old was in the stands to see his new side take on Arsenal, though will have witnessed a game lacking in quality, and speaking afterwards, interim manager ‘Big Dunc’ Ferguson admitted he was ‘happy with a point’.

Carlo Ancelotti is absolutely all of us watching this game pic.twitter.com/6CphebdkbJ

“I think a point was fair,” Ferguson told BT Sport. “We struggled with energy levels and they probably had the better chances but we’re happy with a point. The players dug deep today.

“I’ve enjoyed it but I knew it was going to be tough today. The boys were on their last legs to be honest, after working so hard in the last three games. But we still covered every blade of grass – we just lacked a bit of quality in the final third.”

Ferguson will now join Carlo Ancelotti’s coaching staff ahead of the Boxing Day game against Burnley, and the 47-year-old has admitted he ‘can’t wait’ to work with the former Real Madrid, AC Milan and Chelsea manager.

“What he’s done in the game is incredible so I can’t wait to get started working with him,” Ferguson added. “I’ll be here as long as the club want me here so I’ll be back on Monday.”