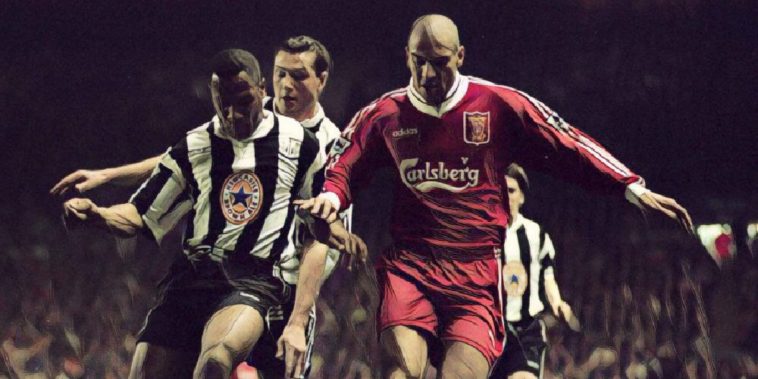 Les Ferdinand has revealed the game which cost Newcastle the 1996 Premier League title.

Kevin Keegan’s entertaining Newcastle side famously capitulated in the 1995/96 title race, finishing as runners-up to Manchester United despite having held a 12-point advantage in mid-January.

Former Newcastle forward Ferdinand has been discussing a memorable period on Tyneside under Keegan, and has pinpointed the game he believes swung the title momentum in favour of Old Trafford.

In what is regarded by many as the greatest game in Premier League history, Newcastle lost a dramatic encounter at Anfield as Stan Collymore’s stoppage-time winner secured Liverpool a 4-3 win, a result Ferdinand believes cost Keegan’s side the title.

“Psychologically, Kevin was one of the best I worked with,” Ferdinand told Planet Football. “He knew what buttons to press, what made you tick. He spoke to everyone with the same understanding. But in the second half of that season, too many of us lost form.

“I was scoring goals, Rob Lee was scoring goals, David Ginola was producing, but then we struggled. Keith Gillespie got injured and we had to shuffle round a little bit. Keegan wanted to get me and Tino Asprilla into the side together, which I felt made us a bit lop-sided and lost our threat.

“Every season, when teams are going for the title, there are pivotal games. Everyone looks at the Manchester United game (when Newcastle lost 1-0 at home), but I don’t think that was the one that lost us the title.

“For me it was the Liverpool game. Had we won, we’d have had momentum to start winning again, it would have lifted us mentally and physically, but it drained us.

“Against Man United, we had chance after chance. On the night, I just thought ‘keep getting in there’, and I kept getting in there, but Peter Schmeichel just made save after save.”