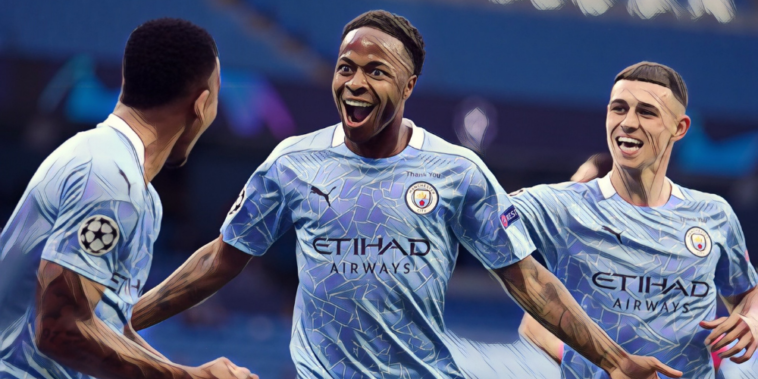 Raheem Sterling has been linked with a move away from Manchester City this summer, with the winger admitting he was not ‘happy’ with his reduced role at the Etihad last season.

Sterling has been a central figure in City’s recent successes and has won three Premier League titles in the past four campaigns, but lost his status as an automatic starter during the 2020/21 campaign with his output decreasing from previous seasons.

The emergence of Phil Foden and competition for places from the likes of Riyad Mahrez and Ferran Torres saw Sterling play less football than he would have liked, and the England international has been subject of transfer speculation so far this summer.

So for those of you who like to bet on soccer games, we’ve decided to look at how the bookmakers view his future.

Here are the five favourites to sign Raheem Sterling.

Sterling has been linked with a return to his native London and Tottenham, with the speculation having increased give Manchester City’s interest in signing Harry Kane.

Pep Guardiola’s side have made an opening offer of around £100m for the England captain, though reports have suggested City would consider player-plus-cash deals if Spurs are open to doing business.

Sterling would represent a fine addition to the Spurs ranks and genuine top-class quality should Kane depart, but would the 26-year-old be keen on a switch to the north Londoners should they sell their best player to get a deal done?

Spurs are also yet to appoint a new manager following the sacking of Jose Mourinho and have suffered a series of failed managerial pursuits, the project far from saleable at present when attempting to entice players to the club.

Real Madrid have previously been linked with Sterling and have been priced as 16/1 odds to sign the England international this summer, as new manager Carlo Ancelotti seeks to overhaul his squad at the Bernabeu.

Real are keen to strengthen their attacking options with Eden Hazard having struggled to justify his huge fee since arriving from Chelsea two years ago, with the Spanish giants remaining reliant on Karim Benzema for goals.

Signing a wide player with the capability of scoring with regularity could alleviate some of the pressure on Benzema’s shoulders, Sterling having scored 114 goals in all competitions across his six seasons at the Etihad.

Real’s business is likely to depend on outgoings with the club’s president, Florentino Perez, having suggested there will be few big signings in Spanish football this summer.

Arsenal have been priced as 12/1 third favourites to sign Sterling this summer, in a deal that would reunite the winger with former Manchester City assistant Mikel Arteta at the Emirates.

Arteta is desperately seeking to revitalise his squad during the transfer window following a disappointing first full season in charge, the north London side slumping to their lowest Premier League finish since 1994/95 and missing out on European qualification.

Sterling’s signing would be a huge statement of intent from the Gunners, though would the star be prepared to step down from England’s dominant force to join a side firmly in transition?

Arsenal are currently looking to raise significant funds from player sales and have a whole host of ‘dead wood’ available for transfer, the likes of Matteo Guendouzi, Lucas Torreira, Eddie Nketiah and Ainsley Maitland-Niles amongst those available should suitable offers arrive.

Granit Xhaka is also understood to be close to signing for Roma, whilst names such as Hector Bellerin and Joe Willock could also depart in moves that could hand Arteta significant room to manoeuvre in the market.

Barcelona have been credited as potential suitors for Sterling, with the Catalans currently 10/1 second favourites despite their financial difficulties at present.

Memphis Depay will also arrive on a Bosman deal from Lyon, and with the Dutchman and Aguero joining a contingent of attacking options that already includes Lionel Messi, Antoine Griezmann and Ousmane Dembele, is there room for Sterling in Ronald Koeman’s squad?

Perhaps the biggest hurdle remains Barcelona’s troubling finances however, a deal for Sterling – who has two years remaining on his current contract – unlikely to come cheap.

Paris Saint-Germain are the bookmakers’ favourites to sign Sterling from City this summer, with the Parisians one of the few clubs in world football seemingly capable of financing a deal in the current climate.

PSG have moved quickly to strengthen their side after losing out on the Ligue 1 title to Lille last season, securing the signing of Georginio Wijnaldum from Liverpool on a free transfer and edging closer to a Bosman deal for Italy number one Gianluigi Donnarumma.

The French side are also interested in a big-money deal for Inter Milan’s Achraf Hakimi, and a further move for Sterling would add to an ambitious recruitment drive as PSG bid to reclaim their throne in France and challenge for the Champions League once more.

With Angel Di Maria set to turn 34 next season, Sterling could prove the perfect long-term replacement for the Argentine and add to a potent forward line containing Kylian Mbappe and Neymar.

Mbappe’s future remains uncertain as the France international enters the final year of his deal at the Parc des Princes, but a strong summer in the transfer market could persuade the 22-year-old to put pen to paper on a new deal.