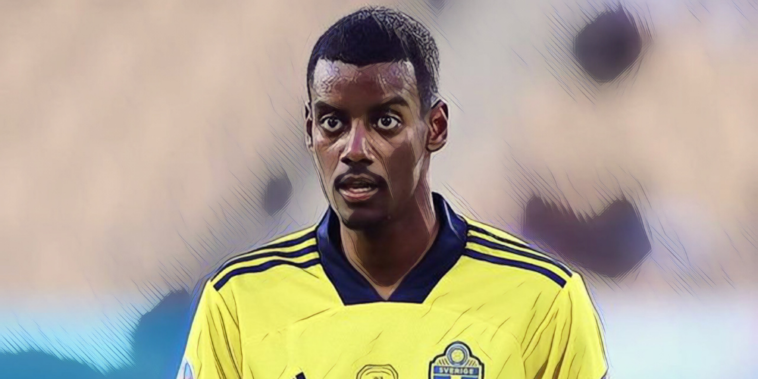 Alexander Isak has emerged as one of the stars of the Euros so far with the young forward having excelled during Sweden’s opening two fixtures, clubs across the continent keeping a close eye on the 21-year-old’s performances.

Isak is the youngest ever goalscorer in Sweden’s history and has been unsurprisingly compared to Zlatan Ibrahimovic, with the forward currently playing his club football in Spain with Real Sociedad.

Isak was named as La Liga’s best young player after scoring 17 league goals last season and his performances at Euro 2020 have not gone unnoticed by Europe’s leading clubs.

The star reportedly has a release clause of £60m in his contract and several sides will be tempted to splash that sum on the exciting young talent.

So for those of you interested in football betting in Canada, here are the five favourites to sign Alexander Isak.

Real Madrid have been priced at 12/1 odds to sign Isak from their divisional rivals this summer, the Spanish giants in need of a refresh following a disappointing campaign for an ageing squad.

Real remain reliant on Karim Benzema for goals with no other player managing double figures last season, the 33-year-old having scored 87 goals across the past three campaigns with the goalscoring burden firmly upon his shoulders.

Luka Jovic’s €60m move to the Bernabeu has failed to pay off with the Serbia international spending the second half of last season on loan at former club Eintracht Frankfurt, with the signing of a new centre-forward believed to be on the radar of new manager Carlo Ancelotti.

Ancelotti has been linked with Premier League names including Dominic Calvert-Lewin and Timo Werner of late, but Isak would provide a La Liga-proven option and potential long-term replacement for Benzema.

Real have a storied history in signing big names following major international tournaments and Isak could be the next marquee arrival in the Spanish capital, with Los Blancos reportedly considering the prospect of offering former Sociedad stars Martin Odegaard or Alvaro Odriozola in part-exchange to finance a potential deal.

Real have been linked with both Erling Haaland and Kylian Mbappe, though president Florentino Perez has ruled out mega-money moves for the duo in the current financial climate.

Arsenal have been strongly linked with a move for Isak in recent weeks, though the forward’s performances at Euro 2020 look set to increase the competition for his signature.

Mikel Arteta is currently in the process of reinvigorating his squad following a disappointing campaign, a whole host of names available for transfer following the Gunners’ lowest league finish since the mid-nineties.

Arteta is seeking additions in a number of roles across his starting side, though the signing of a new centre-forward is on his agenda given the uncertainty surrounding the futures of Alexandre Lacazette and Eddie Nketiah.

Both players are set to enter the final year of their contracts at the club and each could move on should suitable offers arrive, leaving Arsenal with a sizeable void at centre-forward.

Andre Silva, Odsonne Edouard and Dominic Calvert-Lewin are amongst the names reportedly being targeted by the club’s recruitment staff, though Isak shapes as the player with the highest ceiling if the north London side can lure him to the Emirates.

Could Chelsea turn their attentions to Sweden’s emerging starlet?

Thomas Tuchel is keen on signing a new centre-forward with both Olivier Giroud and Tammy Abraham potentially departing this summer, the latter having fallen firmly out-of-favour since the German’s arrival as head coach.

Giroud is also understood to want increased opportunities, leaving the European champions in need of forward additions to supplement the likes of Timo Werner and Kai Havertz.

Chelsea’s number one target is reported to be Erling Haaland with the Blues one of just a handful of sides capable of affording the Norwegian at present, but Borussia Dortmund’s insistence that the 20-year-old is not for sale this summer could lead to an alternative signing.

Isak has the raw attributes and potential to thrive in the Premier League amid regular first-team football and his ability to drift wide and beat players would provide Chelsea with an exciting, multi-functional forward line.

Much of the transfer talk surrounding Manchester United is set to centre around Jadon Sancho this summer, as the Red Devils finally look to secure the Borussia Dortmund winger after an eternity of rumours and tedious speculation.

Ole Gunnar Solskjaer’s wish-list is also thought to include the signing of a new centre-back, whilst Kieran Trippier has been linked with a switch to Old Trafford to provide creativity and competition for Aaron Wan-Bissaka at right-back.

Ask any avid watcher of the Red Devils however, and signings in central midfield and at centre-forward are required, despite Edinson Cavani’s decision to pen a one-year contract extension.

The Uruguay international proved an excellent signing on a free transfer and scored 17 goals in all competitions in 2020/21, though this is expected to be his final season in European football before returning to South America.

Signing Isak could prove the perfect long-term replacement for the 34-year-old, and there would be few betters players for the Sweden international to learn from than one of the best goalscorers of his generation.

Liverpool are the 6/1 favourites to sign Isak from Real Sociedad, with the Reds keen to reinforce their forward options in the transfer market this summer.

Jurgen Klopp’s side suffered a sharp downturn in fortunes during the 2020/21 campaign, finishing a huge way adrift of champions Manchester City in a disappointing defence of their drought-breaking title.

Defensive injuries contributed hugely to that fall-off in performances, but concerns were raised over their forward options with both Roberto Firmino and Sadio Mane looking a shadow of their former selves.

Liverpool’s fabled front three have reached great heights in recent campaigns, though each are now approaching 30 and a refresh is needed with Isak perhaps the perfect player to add to their options.

Isak is tall, mobile and possesses a fleet of foot to burst past opponents, his multi-functional talents offering an intriguing alternative to Firmino as the Reds’ number nine.

Adding Isak – alongside Diogo Jota who signed from Wolves last summer – could be the perfect plan for Klopp as he looks to move gradually from the previous era into a new one in the coming seasons.

Read Also – Euro 2016: Remembering the England XI that were embarrassingly dumped out by Iceland