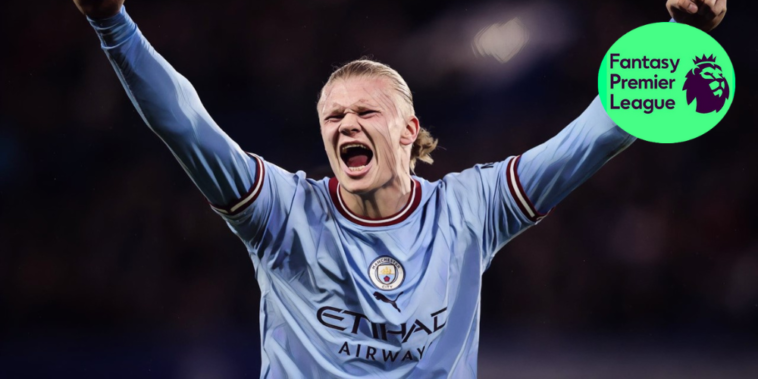 Ahead of this weekend’s Premier League action we’re on hand to provide our best advice for Fantasy Premier League, selecting four options we believe should be the leading contenders for your crucial captaincy.

Gameweek 20 provides several doubles as four Premier League clubs feature twice in a bumper round of fixtures. There are huge derby clashes in Manchester and north London, while Everton, Southampton, West Ham and Wolves all face six-pointers down at the bottom.

Ahead of Gameweek 20, we look at four of the best captaincy options in Fantasy Premier League.

Erling Haaland vs Manchester United (A) and Tottenham (H)

Erling Haaland’s form this season has almost made this feature redundant, with only the bravest of FPL managers having moved away from the popular perma-captain this season.

Manchester City’s double game week makes the Norwegian the overwhelming favourite for the armband, despite the difficulty of fixtures against an in-form Manchester United and Tottenham.

Haaland introduced himself to the Manchester Derby with a hat-trick at the Etihad earlier in the season and is as fixture-proof a player as FPL has ever seen, having scored 21 goals in just 16 league games so far this season. He has failed to produce an attacking return on just three occasions this season.

Haaland leads the league for goals, xG, xG/90, shots and shots on target this season. The triple captain chip could be widely used on the 22-year-old this weekend, before the risk of rotation when the European season resumes.

Riyad Mahrez vs Manchester United (A) and Tottenham (H)

An alternative Manchester City option for those brave enough to back against Haaland.

There have been encouraging signs from Riyad Mahrez in recent weeks, who after a slow start to the season appears to be approaching his best form.

The Algerian produced a man-of-the-match performance as City thrashed Chelsea in the FA Cup last weekend. He scored twice, including a fantastic free-kick to open the scoring.

It’s now eight goals in 15 starts for Mahrez in all competitions this season and the 31-year-old boasts a strong record against his Gameweek 20 opposition. Since signing for City, he has four goals and two assists in eight starts against Manchester United and Spurs.

Harry Kane vs Arsenal (H) and Manchester City (A)

Harry Kane’s outstanding campaign has been somewhat overlooked due to Haaland’s exploits, but the Spurs striker will be well backed in Gameweek 20.

Kane takes on Arsenal in the north London derby, before going head-to-head with Haaland as Spurs meet Manchester City at the Etihad.

The 29-year-old has outscored Haaland across their last five Premier League fixtures (Kane has five goals, Haaland has four) and hauled a season-high of 16 points at Crystal Palace last time out.

It's been an impressive last 5️⃣ Gameweeks for Harry Kane 🙌

His record against Arsenal should also be considered with Kane the highest scorer in the history of the north London derby. He has 14 goals in just 16 league appearances against the Gunners and five attacking returns in his last five games against the club’s fiercest rivals.

Kane’s record against Manchester City is less impressive, with seven goal contributions in 12 games against the champions. However, Spurs have won four of the past five Premier League meetings between the teams and Kane produced an outstanding individual performance as the north Londoners won at the Etihad last season. He scored twice in a 3-2 win, including a dramatic late winner.

Marcus Rashford vs Manchester City (H) and Crystal Palace (A)

Marcus Rashford is a man in form right now.

Rashford has seven goals in his past six games in all competitions and continued his hot streak with two goals off the bench against Charlton in midweek. His double downed the League One side and sent Manchester United into the EFL Cup semi-finals, while he became the first player since Wayne Rooney in 2010 to score in eight consecutive home games for the club.

Most All Comps Goals by PL Players
Since World Cup

It’s now 21 goals involvements in 25 appearances for Rashford this season, who has returned from the World Cup – where he top scored for England with three goals alongside Bukayo Saka – in career-best form.

He is averaging a goal or assist every 88 minutes this season and will be confident of continuing that streak as United face a double gameweek 20. Manchester City are the visitors to Old Trafford this weekend, before Erik ten Hag’s in-form side travel to Crystal Palace.