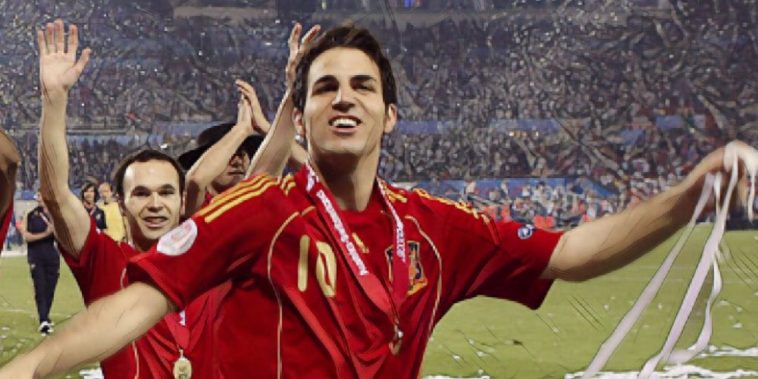 Premier League legend Cesc Fabregas has admitted he sees certain ‘similarities’ between England’s current crop and the Spain side that won the European Championships 13 years ago before going on to establish themselves as the worlds finest side.

England are currently preparing to take on Denmark in the last four of this summer’s postponed Euro’s, Gareth Southgate’s side having also reached the semi’s at the World Cup three years ago.

Despite that though, the Three Lions are without tournament success since that infamous victory against West Germany back in 1966, with a whole host of talented players having come and gone without adding to that solitary World Cup triumph.

Having seen off Ukraine in the quarters, Southgate’s side are the favourites to make it to a first final in over half a century, where, should they progress, they will face serial winners Italy or Spain.

13 years ago, an emerging Spain side – that included a 21-year-old Cesc Fabregas – finally got their hands on the Henri Delaunay trophy, beating Germany to win a first major competition since 1964, and the former Arsenal and Chelsea midfielder admits he sees ‘similarities’ to that successful side and England’s current crop.

“For England, it has been 55 years of hurt and for Spain it was 44 years of hurt before we won the 2008 European Championship, and there are certainly similarities between Gareth Southgate’s squad and the squad I was part of,” Fabregas writes in the Telegraph.

“There are a lot of young players in the England squad and players like Kalvin Phillips, Declan Rice, Bukayo Saka and Jack Grealish who were still not considered big, big players outside their clubs or the Premier League before this tournament.

“It was similar for us with Spain in 2008, when I was 21 years old and a young player at Arsenal. People look back now and say it was an amazing team and it was, but you have to remember in that moment, before the tournament, lots of the players who are now considered stars were in different situations.

“David Silva and David Villa were at Valencia, Iniesta was starting to play at Barcelona, he was 24. He was not a big name then, he was just starting. Xavi was older, he was 28, but before those Euros when he became MVP, he was not valued as a great player. If you went to watch Barcelona back then, Xavi was just considered a ‘normal’ player. It’s the truth.

“From that tournament, our value increased, all of us. I’m not talking about transfer fees or our wages, I mean how we were viewed and how we were rated, in our country and around the world.

“It’s a bit different in England because I think you value your players higher, you are better at that. But, for sure, players who maybe were not considered big, big players before these Euros will be looked at and remembered differently if you go on to win the tournament.”

Once England had unconvincingly navigated their way through the group stages, plenty of people looked back at the country’s quite frankly atrocious record in knockout games down the years, their last knockout win coming against Spain in the quarter-finals in Euro ’96.

England have featured in five semi-finals in major tournaments down the years, losing all four since reaching the final in 1966, though Fabregas remembers similar discussions about the 2008 Spain side.

“In England, the talk outside is about the fact they have lost some semi-finals and in Spain in 2008 it was all about us not getting past the quarter-finals and our bad record against Italy,” he continued.

“The past did not scare me at all and I think it was the same for many of the other Spain players, but I did feel a change in how much support we received and the belief from outside after we lifted our supposed curse and beat Italy in the quarter-finals.

“Maybe England have already had that moment against Germany, but getting into a final would bring even more energy from outside and, because they are playing at home, at Wembley, that could be powerful.”

After emerging as the cream of Europe, the Spanish went to become the world’s dominant footballing force, winning the 2010 World Cup before defending their European crown in 2012, and Fabregas believes that success this summer spark a similar period of success for England.

“It is too soon to say whether or not England might be able to do something similar to Spain and quickly win another major tournament if they do manage to go on and win the Euros.

“For us, it was really the start of something very special and it created a winning mentality. Everything came together, the quality, the mentality and the confidence. From that moment, in big moments, we were always there to deliver.

“But, and this is the case at clubs as well, it can also be the opposite and everybody can relax a little bit after you win something. You can win one, but then the massive challenge is to win the next one, especially when it’s a World Cup and you have to face Argentina and Brazil. It’s a different story.”